I want a robot elephant

Here's a nice video montage from the IEEE Robot Show. Notice they dropped the "baby" from the throwable robot moniker. My blog is still in second place in the Google search results for "throwable baby" after the IEEE Spectrum.

I spontaneously started to cry when Robonaut came on camera. I am way too sensitive.

I was thinking about robots this week when I was trying to move some stobs from the woods to my yard for decoration and utility. (Apparently "stob" is not a common word outside the South. In my case I mean the heart wood left over after the sapwood burns or rots off a longleaf stump or log. Stobs are what rosin comes from.  My mother, aunt and I share a common affliction where we think these things are artistic and we collect them from the woods and put them in our yards. Whenever men come here with backhoes and trucks and trailers they routinely run over them with no regard for their decorative or protective nature, so I suspect it's not a shared aesthetic.) The Forestry Commission's bulldozer drove right over my septic tank, breaking the stob I had there to stop people driving on my septic tank. I got a new, taller stob to put in front of the septic tank and moved the other one behind it. I also got a tall stob to put next to the gopher hole to try to keep anybody from driving over that. The weight distribution of the steel tracks worked out alright on my 1000 gallon reinforced concrete septic tank, but the gopher burrow would've been totally collapsed. I managed to get these out of the woods by myself with chains and a pickup truck and only lifting one side at a time. I liked the hole in the one stump but I broke it with the chain. 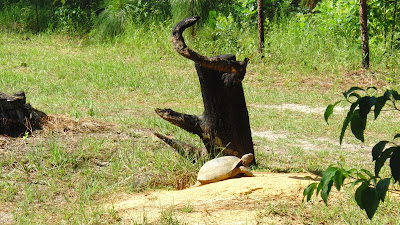 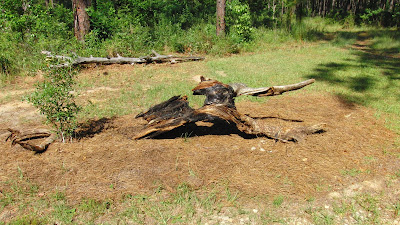 I want a mobile robot to do heavy lifting. They have humanoids, dog-style robots, and snakey robots to search earthquake rubble for survivors, but where is the elephant robot? I guess machinery makers think this need is met with the assortment of loaders they already make. 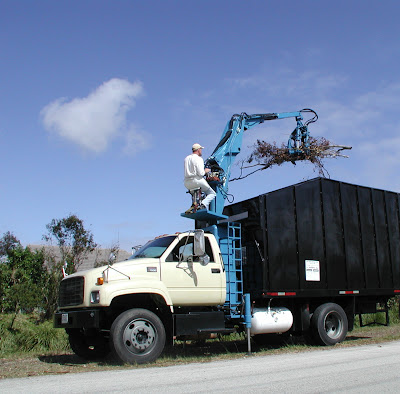 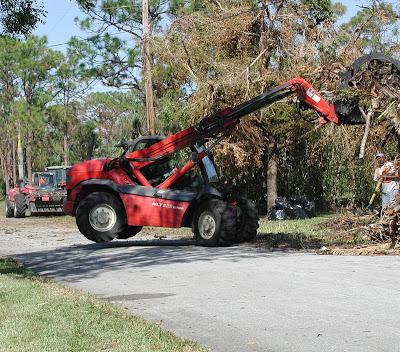 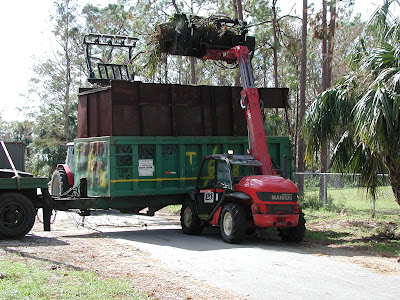 (Photos from 2005 Hurricane Wilma cleanup in Broward County, FL. That Manitou operator was incredible. I could watch him all day. He routinely got that thing up on two wheels -- side, front, he didn't care.)

But I want something more personal that I can use where I don't have a road, without trashing native ground cover. I'd like it to be able to lift and hold construction materials, like the end of a center beam when I'm building a roof. I want an elephant! It should operate on voice commands, like a real elephant, so I can use it by myself. It could use an iOS app. I know they are working on some automation like that at Georgia Tech (This app works with non-spoken cues, like sip and puff, only using a magnet in a tongue stud and a special roof-of-your-mouth retainer like the one I still wear every night to keep my teeth straight.) Next step is to take it out of the handicapped lab and let it help the able bodied. (I'm starting to think being an introvert is a legitimate handicap though. It sure makes you unemployable.)

The rumors are that Apple is working on a TV that will work on voice commands like Siri instead of with a hardware remote. Well that's a good start. Now make that work with my electric elephant! I might be too sensitive to even have a robot assistant though. I would feel so bad if it got rusty or if I broke it. Still, better than a real live thing.
Posted by Beachton at 11:56 AM