I upgraded my iPhone 4s with the latest OS and look what I got! If you slide UP you go straight to camera. There was a direct to camera shortcut before with a double click but I could never remember it. This is awesome! 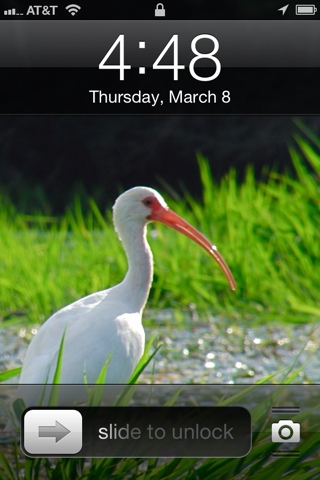 If I walk up my driveway until I get out of range of my WiFi I also get a 4G icon instead of the old 3G, which I don't believe even a little bit. Nearest 4G is Atlanta and that's hundreds of miles away.
Turns out the HSPA+ data radio in the iPhone 4s is called 4G in a lot of other phones. Under pressure from ATT Apple agreed to finally call it 4G. ATT wants to be able to have the iPhone compared equally to other phones with the same radio by calling it the same thing. So there's 3G (in the iPhone 4), 4G (iPhone 4s), and 4G LTE, which is what is in the new iPad. That 4G LTE data rate is fast enough to use up your whole 2 GB data plan in 4 minutes (at theoretical throughput, probably not really possible.)
I'll stick with the WiFi only iPad with lots of memory. I can load it up with photos to edit and books to read and all sorts of other media if I go out of WiFi range.
Posted by Beachton at 4:52 PM