I found out about Feathers when I was playing with my non-contact IR thermometer testing the temperature of different colored things in the sun. I wanted to know how black birds could stay here in Austin all summer. (Thermodynamics of Ducks and Tees) I found out that my corner library had the book but I had to sign up on a waiting list to get it. (I actually didn't have a library card before this. I went in there once looking for a book about snooker and they didn't have a single billiards book. I went away in disgust humming songs from The Music Man.) I went ahead and emailed the author to see if there was anything in his book about hot black birds. He said there was a little bit, but it could be studied further. By the time the book came in I had already finished experimenting with hot colors and I had moved on to thinking about evolution. The full title of the book is Feathers: The Evolution of a Natural Miracle so it was kind of perfect. I will go ahead and say if you are remotely interested in birds you should get this book. If you are too busy to read this whole review I don't see how you're going to read the book either, so let's press on. 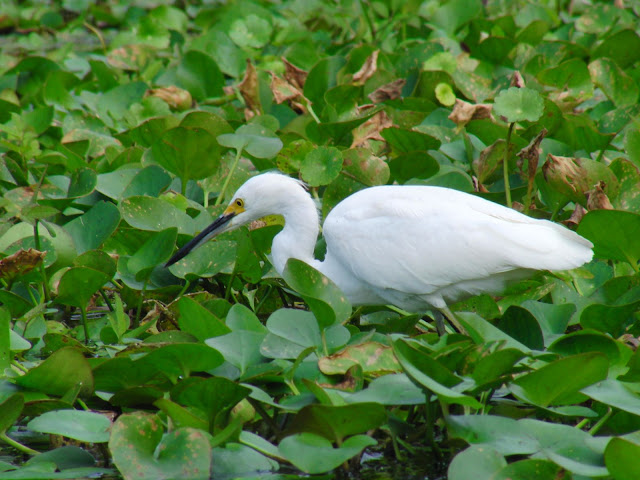 This bird right here is a snowy egret. When I was a little girl we would drive from Georgia down to my great-grandmother's house in Deland, FL. We'd see these egrets in the ditches on the side of the road. I can remember my mother explaining how they almost went extinct because of their feathers. Their breeding plumage (not seen here) is long and flowing. These feathers were so popular in women's hats in the late 1800's that men would go to the breeding colonies and just kill every single bird, leaving their nest of chicks to die. By the time the Migratory Bird Treaty was signed in 1916 there were only a few breeding colonies left in the deepest part of the Everglades. That means when my grandmother was little there were none of these birds. But by the time she was my age she could see them coming back. And now they are downright common. It's kind of a nice testament to what happens when humans stop doing too much of something.

Thor Hanson covers this topic in his book, but only briefly. He goes into a lot more detail about the trade in ostrich plumes. That's a pretty good story itself. It's about farmed birds and how the use of feathers in fashion is influenced by powerful businessmen. Unfortunately for the ostrich magnates fashion changed drastically at the turn of the century and big ostrich plumes didn't suit the restrained lines of the fashions during World War I (1914 to 1918. I had to look that up. I can line that up on my personal time scale because my grandmother was born in 1913.) I guess that helped that Migratory Bird Treaty a lot, too.

There's also a section about the modern feather trade where the author goes to Las Vegas to meet the expert in feather bleaching and dying who supplies the big shows with custom feathers. After I finished reading this book I went to a discount store to get an extra cookie sheet and I saw a skirt completely covered in feathers right when I walked in. Maybe they're coming back this year! I decided to do a quick survey (that store and one other one) Sure enough, feathers are huge this year! Here's a an album of selfies of what I found on one Friday afternoon at TJ Maxx and the Neiman-Marcus outlet.

Something I did not know before I read about the visit to the feather dying expert was that the iridescence of feathers cannot be removed with bleaching. She can dye turkey feathers a different color and they will still be shimmery.

Another thing I learned from Feathers is how waterproofing works. It's not oil, which is the old theory. It's the actual microscopic structure of the feather surface. Tiny little points make tiny little bubbles that make the water unable to penetrate the feather. (scanning electron microscope image p. 218) I wonder if that's how Dante Shepard, PhD, made his super hydrophobic surface as seen in this picture? The droplet looks different so I don't think so.

So some birds are super waterproof, like penguins. The Jackass Penguin has 900 points per millimeter in the feather lattice that touches the water, compared to dozens of points per millimeter for non-water birds. That extreme hydrophobia is important for them to stay dry and insulated living where it's so cold. But at the same time they wouldn't be able to swim underwater and catch fish if they bobbed around on the surface like a duck. The book mentions that loons have denser bones so they can dive more easily, but it doesn't really go into detail on penguins. I figure they don't have to fly, so they could be pretty heavy to make up for that air trapped in their feathers. I looked it up. Turns out penguins are positively buoyant and they even take a deep breath before they dive, which means they have to swim even harder to get underwater. But they do naturally pop back up with no effort, so that's a bonus. The ice cold water keeps them from overheating from all the exertion I suppose. But what about birds that are negatively buoyant? I know these birds.
I learned from Feathers that Cormorants don't actually get wet all the way to the skin. I thought they did! Apparently their feathers get wet just at the edges and the middle part stays dry to keep their down from becoming soaked. Is this true for Anhingas too? I want an Anhinga feather to experiment with now!

Besides learning about the fossil record and evolution of feathers, which I was totally ignorant about, and these other things I've mentioned that I didn't already know I found this book very engaging because of the personal stories. Thor Hanson is a natural history writer with a strategy similar to Bruce Means. He writes stories about things he did, not just a string of facts. It makes it fun to read. The story about his field work with vultures in Africa is just revolting. "The message is clear: feathers may be an evolutionary marvel for flight and insulation, but they're worse than useless when you're neck deep inside a dead zebra."
Other birds evolved to not have feathers on their heads for other reasons, like the turkey above. That head of his turns bright red in breeding season to attract a mate. 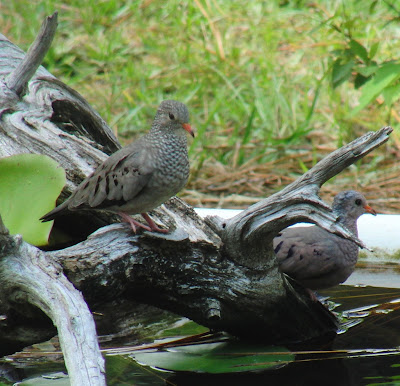 "To truly get my head around this diversity of form and function, I decided I needed to dismantle a bird," says Hanson on page 33. He finds a roadkill Winter Wren in his freezer, gets out the Joy of Cooking for reference and set to work methodically tweezing and sorting and counting all the feathers. Now I kind of know where he's going with this. Apparently he's not the bird killing kind. Where I come from people shoot all the birds. I have dismantled plenty, from wild ducks to robins and I vaguely recall that I floured and fried two cardinals and a blue jay my brother shot when he was ten. "...I had failed to achieve the tidy dressed look pictured in Joy of Cooking... It would have left room on a toast point. If you ever find yourself plucking a songbird, you'll be amazed at how little is left when you're done," asserts Hanson. Don't I know it. Look at those pretty little Ground Doves up there in my bird bathtub. Doves are delicious, right? Well one day back in the '70s when one of my cousins got home from middle school he shot a Ground Dove with his pellet rifle. And he plucked it. Then he had that realization like Thor Hanson that there sure wasn't much bird inside that bird. But he was committed once he killed it, so he decided he better cook it up. His mama had just gotten their first microwave oven so he decided that would be a good way to cook this thimble sized bird. Not worth heating up the regular oven. He guessed 30 minutes would do it. Now at this point in him telling me the story when I was a child I just started laughing so hard I don't really remember what happened next. (My father is an early adopter so we'd had a microwave for years already.) But somehow I have it in my mind now that the petrified remains of that Ground Dove permanently reside in the glass cabinet with all the arrow heads and other objet d'arts at my aunt's house. If it's not true it should be.

Is it unusual to have a stock of whole dead animals in your freezer? I only ask because I'm starting to suspect that all kinds of stuff that's normal for naturalists is not normal. I used to think the whole reason my grandmother had a chest freezer on the porch was to put dead rattlesnakes in it. We saved them for Bruce Means to dissect for his research. It kind of became commonplace to put anything in there we thought might be interesting later. I'm glad digital photography came along so now I can take pictures of things instead. I don't have a chest freezer.

High speed video is also helping feather research. The Club-winged Manakin plays his feathers like a violin but nobody knew it until high speed video made it possible to see it in slow motion. Technology helping us understand the fundamentals! I like it! "The exploration of natural miracles is a fundamentally open-ended and curiosity-driven enterprise. It reminds us that science is not always about the answers; it's about the questions." (p. 261)

There's one final thing I want to illuminate about feathers. This wasn't spelled out anywhere in the whole book. In fact I've never read this anywhere or been told it by anyone with authority. But I'm trying to step back and look at things I take for granted and think that other people might be missing out. Has everybody played with a feather? Has everybody that's played with a feather reached the same conclusion I did? The Apple dictionary defines preen as "(of a bird) straighten and clean its feathers with its beak." But I think that's missing the coolest part.

"As a writer, my job is to keep you turning the pages of this book, but as a biologist I encourage you to put it down once in a while. If you do you'll soon find aspects of the story very much alive in the world around you." (p. 10). Done and done.

Get this book. It's good. Here's the link to Amazon.

*Update: They found some early feathers trapped in amber! Neat!
Posted by Beachton at 1:20 AM