Trying to Get Attention

Sean Carroll posted a link on Google+ that caused me to have an epiphany. It's a blog post where fantasy author Michele Lee interviews her 7 yr old daughter about a new DC comics version of one of her daughter's favorite characters, Starfire.

Now I don't read comics, didn't know who Starfire was until now, and don't care that much that DC comics just pimped out some old characters to make pornos with them. But what this child says crystallizes for me something that has been bothering me forever in a nebulous way. (There's more pictures and background and links in the original article or this repost since her own blog seems to be down. Sorry it's a gawker site.) Apparently the little girl likes and admires this character -- the original one who was apparently in a TV show in the early 2000s. And she knows exactly why she likes Starfire. Brilliant.

"She's like me. She's an alien new to the planet and maybe she doesn't always say the right thing, or know the right thing to do. But she's a good friend, and she helps people. She's strong enough to fight the bad guys, even when they hurt her. Even her sister tried to kill her, but Starfire still fights for the good side. And she helps the other heroes, like Superboy and Robin and Raven.
"She's smart too. And sometimes she gets mad, but that's okay because it's okay to get mad when people are being mean. And she's pretty."

I think I like this kid. And Starfire sounds relatable. Michele asks her daughter about pretty.

Oh, I wish that weren't true, but the kid is being truthful. I am personally annoyed with the idea that hair makes somebody pretty because it hurts my head to have long hair and it's very dangerous when working with machinery and I had a very bad experience when I let a man talk me into growing my hair long. I'm suspicious that long hair makes people think of you primarily as a pretty person with voluptuous hair and not a real person. Although apparently in Starfire's case she had enough personality to go with that much hair.


"Do you think the Starfire from the Teen Titans cartoon is a good role model?"
*immediately* "Oh yes. She's a great role model. She tells people they can be good friends and super powerful and fight for good."
"Do you think the Starfire in the Teen Titans comic book is a good role model?"
"Yes, too. She's still a good guy. Pretty, but she's helping others all the time and saving people."
"What about this new Starfire?"
"No, I don't think so."
"Why not?"
"Because she's not doing anything."

YES! This child is amazing. She gets it. Looking pretty is fine, but what can you DO?

"What about this Starfire? What do you think about her?" (Referring to image from DC's reboot Red Hood and the Outsiders)
"I can see almost all of her boobs."
"And?"
"Well she is on the beach in her bikini. But…"
"But?"
"But, she's not relaxing or swimming. She's just posing a lot." *my daughter appears uncomfortable*
"Anything else?"
"Well, she's not fighting anyone. And not talking to anyone really. She's just almost naked and posing."

And there you have it. THAT is what is wrong with objectifying women. A child can see it. You take a perfectly respectable character with admirable qualities and you reduce her to somebody that doesn't even act or dress appropriately for her environment. That's a shame.

I want to be really clear that I am have no problem with women posing. I have a friend who does some marvelous fine art photography of nudes. Posing for a picture to make the female form as attractive as possible is an admirable artistic pursuit in my estimation. What I mean is when you try to take a situation that requires a complete person and they blow it with their physical appearance -- I don't like that. They cross the line from making art to... I don't know. Help me out, 7 year old girl.


"Is this new Starfire someone you'd want to be when you grow up?"
*she gets uncomfortable again*"Not really. I mean, grown ups can wear what they want, but…she's not doing anything but wearing a tiny bikini to get attention."

Exactly. She's not doing anything but trying to get attention. I have never ever understood the idea of trying to get attention. I HATE attention. I am criticized by my stylish friends for being a boring dresser. I am just trying to blend. I want to look nice, but not striking. I want to be the kind of person that people ask for directions on the Metro in Paris, not the kind they try to photo bomb at the beach. I want to look like the kind of person that knows how to read a map. Not the kind that would have a map of the world tattooed across her breasts. (Although I do like the idea of a hemispherically accurate Mammagraphic Projection)

It is nice to know that I'm not the only person who feels this way. Clearly nobody at DC Comics does, but  at least there's a 7 year old girl somewhere who is uncomfortable with it too. I'm trying to get into the geek culture more because I think there might be friends to be made there. That's kind of why I had my own comic hero drawn on commission. 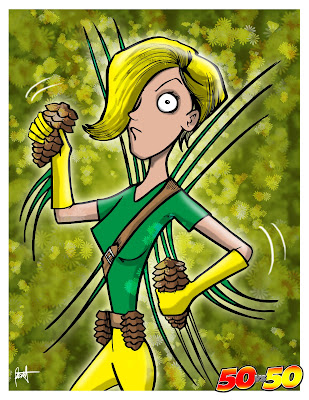 But I'm not 7. It would be stupid for me to imagine somebody I aspire to be when I grow up. So I made up a hero that I already grew up to be. I don't read comics at all, I don't play video games, I'm not really into sci-fi or fantasy, so I was probably unqualified to write the specifications for a comic hero. But I think I tapped into the sensibilities of my new favorite 7 year old and made a good hero who does something. She would appreciate that you can't see any of my boobs. I think she would be disappointed in my hair, but life is like that.

Lady Longleaf protects the forests. She defends diversity against invasive exotic species. Her weapons are the pinecones of Pinus palustris, the Longleaf pine. She wears stout gloves to protect her hands from the sharp spines on the pine cones when she throws them at her foes. The ripe pine cones are for warnings. She uses heavy, hard green pine cones like armor-piercing rounds. (I became aware of their power during Hurricane Frances listening to them hit the metal roof of the porch. It was like mortar fire.) She can release thick clouds of yellow pollen to make a dramatic entrance. She only tolerates attention because it helps her save the ecosytem. (Lady Longleaf is not really into people that much. Sorry, kid. I had no Starfire role model growing up.)
Posted by Beachton at 8:06 PM