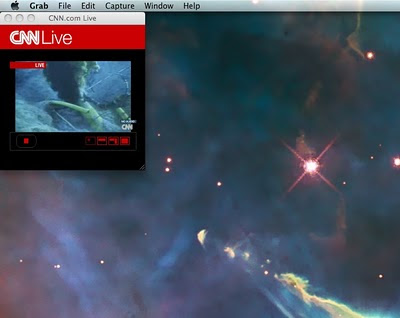 Now thanks to CNN I have a little window in the corner of my screen with live coverage of the oil shooting out into the Gulf of Mexico. Constantly coming out.

It's sort of a nice reminder. While we mess around with worker safety training and purchase orders and myriad other details of business the oil and gas and whatever that light colored stuff is just keeps roiling and boiling out into the cold, dark water.

Of course it's not dark in the picture. Where is the light coming from? It's very well lit, this scene. I wonder who set it up? I assume CNN is just buying the feed from some outfit equipped for deep sea work. I guess they're paying so much they don't need to give them credit.

Update: apparently the feed is from BPs Remote Operated Vehicle (ROV) monitoring the riser. I can't see this on my computer because it's apparently in Microsoft media server format. Apple don't play that.
Posted by Beachton at 2:21 PM