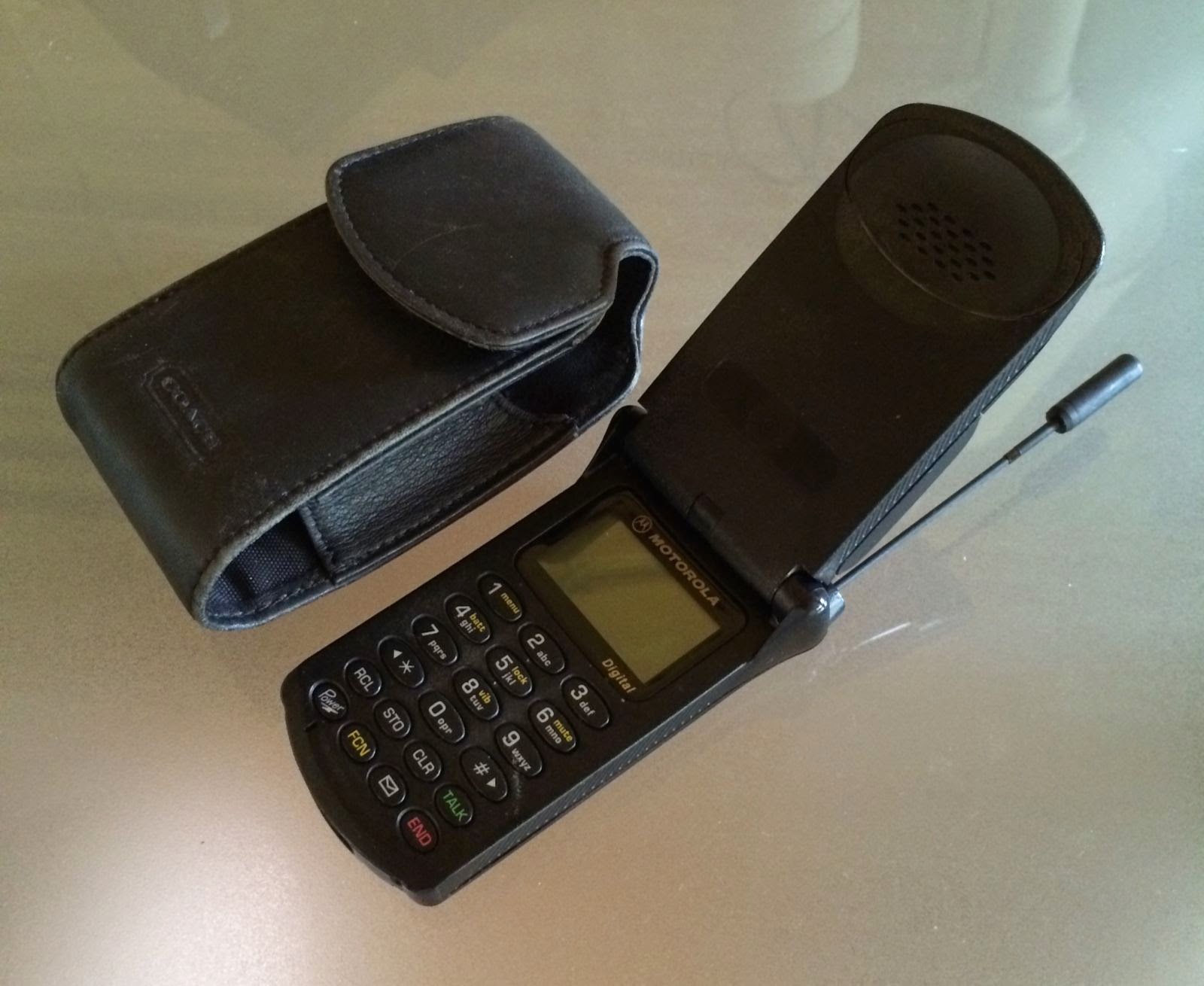 Did you see my stop motion video, Obsolete? Remember the Motorola StarTAC? After I finished messing around with that video (which really hurt my back, which is the reason for the extreme brevity of the film) I wanted to do something with that old phone and the nice Coach leather case for it. I thought of making it into a paperweight by strapping something heavy to the belt loop on the back, but then I realized it would be better to just replace the phone with something heavy. The case is really easy to pick up and the leather is soft. The phone went back in the plastic bin with the laptops.

Now I know what you're thinking, "But Barbara! You told us you were totally paperless!" That's true, I don't keep paper on my desk. But I do frame a lot of posters that come rolled up in tubes. They need to be flattened out. So I got out my sewing stuff and made a heavy thing to go inside the case. I measured the phone to see how big to cut my fabric.

I had a choice of some black velvet, black speaker grill cloth, or the scraps off some gray black-out curtains I hemmed up. I decided the black-out fabric would be the tightest weave. The velvet kind of passes light if you hold it up to a window, and the grill cloth is right out. It's made to be air permeable. It would look better if it were black and not gray, but scroungers can't be choosers. I can always make a tiny black pillow case for it later. Ooo, I should make a little black pillow case with a wee antenna sticking out. But anyway, on with it.

After sewing the two unfinished edges, turn it right side out and fill it with lead shot. I happened to have a 3 lb bag of lead shot from a neoprene scuba diving belt. I loaned the belt to somebody decades ago and never got it back, but the lead weights have been consistently useful regardless. But this one got a hole in it when I was using it to rivet patches on the roof of the Spartan. I fixed it with tape, but I felt ok about using it for another project.
I worked over a dishpan to fill up the bag. I made a funnel out of an index card and poured the shot from the mesh bag into the new StarTAC size bag.


When I finished I still had some shot left. I made another bag to be a paper weight. I had something ampule shaped in my mind when I sewed a freehand shape.
This one was a lot harder to fill with shot. I don't recommend this small of a neck. It does have a wonderful feel in the hand though and is easy to pick up.
The poster you see here is a Matrix poster from Mondo Tees. I did a neat framing ensemble for that.
seen here.
Posted by Beachton at 8:12 PM