Iceland Volcano Under a Glacier

Volcano Bárðarbunga is hard for me to pronounce. There are two rolled r's in a row. I have a hard enough time with regular r's, like in library. I was hoping I could call it something like Volcano MuaHAAHahahaaa because of the resemblance to a villain planning some terrorist act. This led me to do more extensive research, to see if it really could be the jolt of reality that politicians need to start planning ahead to cope with climate change. Because it's a blog and I know most people don't want to read the whole thing, I'll go ahead and admit it probably won't be that kind of volcano.

The spelling I think of is based on my recent binge watching of "24," Bauer-thar-boon-ka (A topic for another blog. That show makes me so glad I don't work in any kind of chain of command.)

Saturday, August 16 a seismic swarm started around the caldera of Bárðarbunga, which is underneath a glacier. Since early June GPS stations have indicated activity under this massive volcano. Taken together that means magma movement, but it is over 5 km below the surface. Over the course of the week the earthquakes have moved to the east and north along a fissure. My favorite site for up to date information is the Icelandic Met Office.

Here's another article from Daily Kos with some nice photos. This one got me thinking about how a big volcano might change the weather in the northern hemisphere. So I read this one by Dave McGarvie of the Open University. He seems unexcited about the possibility of a big ash-spewing volcano. I think mostly because it's under 400-600m of ice (I've seen both numbers, not a stat I would vouch for.) Here's what he says:

At the very least, magma will stall in the Earth’s crust and form an intrusion. We may never see any manifestation of this, except on instruments. But if magma does break through to the surface, then how much magma erupts and what is above it will determine the eruption style.

If it is under thick ice – that is more than 400m thick – and not much magma comes up, then a pile of volcanic rock will accumulate at the base of the glacier. This will melt a lot of water (14 times the volume of magma under ideal conditions), and we may see a depression in the ice surface. This will add water to a major river, and cause flooding downstream.

If it is under thick ice and lot of magma erupts along a fissure, then we will see a repeat of the Gjálp eruption of 1996, with erupting magma melting a pathway to the ice surface within hours and forming an eruption plume. Compared to the massive plume of Grímsvötn 2011, this will be a small plume and less problematic for air travel as the particles will not be dispersed widely.

If magma breaks to the surface outside the glacier margin, there are likely to be small but powerful local explosions as the rising magma encounters the water-bearing sediments that occupy the land in front of the glacier margin. Explosion may occur because flashing water to steam involves more than a thousand times expansion in volume. After the water has been used up, or the magma isolated from the water, then a normal fissure eruption would be expected.

I emphasise that the above are what I currently consider the most likely scenarios. The “likeliest” scenario could change at a moment’s notice. That is part of the fun and frustration of anticipating eruptions at poorly-known and remote volcanoes.

Well that sounds like it would be pretty bad for Iceland, but not enough of an effect to make American politicians understand how quickly Earth can change the normal weather patterns for years at a time. He goes on:


What is the worst-case scenario?

That this is the start of a major volcano-tectonic event at Bárðarbunga, which may further develop to the southwest. This is a concern because in the southwest there are fissures that have produced Iceland’s most voluminous lava flows, since the ice melted some 9,000 years ago.

These fissures are up to 100 km long, and far to the southwest they can trigger eruptions at the Torfajökull volcano. Torfajökull happens to have an abundance of sticky magma that can erupt explosively and produce lots of fine ash. The last eruption, in 1477-1480, produced just two lava flows and minor explosions. But the one before, in about 874 AD, produced an explosive eruption plume that was carried over much of Iceland.

Also to the southwest of Bárðarbunga lie the rivers which produce much of Iceland’s hydroelectric energy, and a fissure eruption in this area could cause big problems. Icelanders have long known about this possibility and have specific plans in place should this happen.

I emphasise that we don’t know yet whether this is an isolated event or the start of a more prolonged and larger volcano-tectonic episode. It may be years before we know for certain. But at some time in the future there will be a major fissure eruption to the southwest of Bárðarbunga – we just don’t know when.

I wonder what he means about the Icelanders having specific plans for their hydroelectric energy? I expect magma melting 400 meters of ice in a day would be a pretty epic flood. What do they do exactly? I found a PDF about the plans one hydroelectric plant has in place for a catastrophic flood from magma under a glacier. Flood design criteria for Kárahnjúkar dam – a glacially dominated watershed by G.G. Tomasson et al. This one is northeast of Bárðarbunga, to power an ALCOA aluminum smelting plant. I'm starting to think there is likely a dam that's going to get damaged if magma erupts under a glacier no matter where it happens. This particular reservoir is formed by three dams. The biggest one has these tunnels that send the water to a powerhouse some distance away. I guess that right there is the biggest precaution. The tunnels will only pass so much water. The power house should be protected even if the dams are completely destroyed. 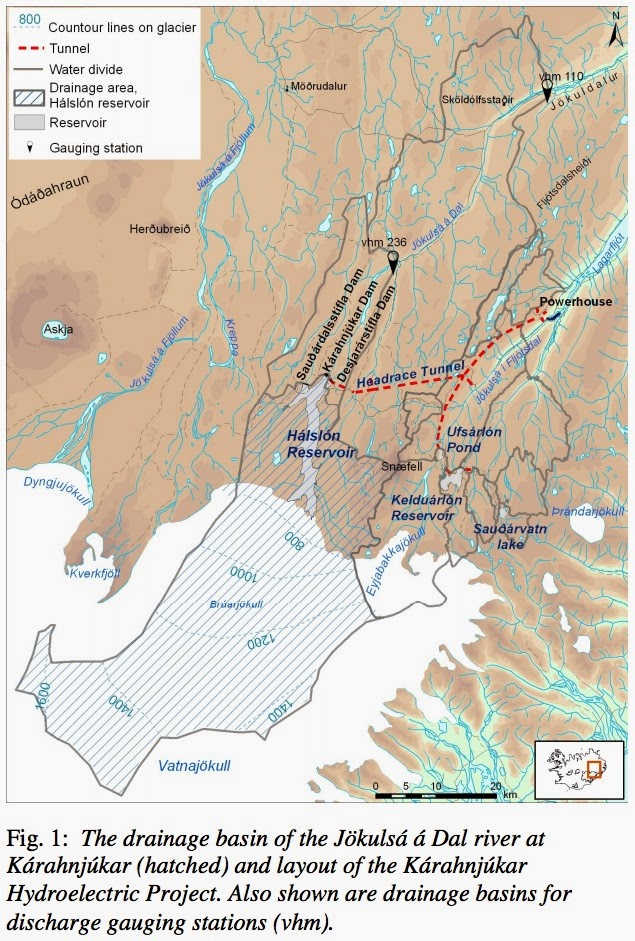 That's the map from the Civil Engineering Report. Now here's the map from the Icelandic Road and Coastal Administration showing the area evacuated because of the risk from this volcano. It looks like the ALCOA plant is outside the evacuation zone, but just barely.

http://www.vegagerdin.is/media/umferd-og-faerd/Halendi.gif
So how about these plans they're supposed to have? Here's a section from the introduction:

Several active volcanic areas are known to exist underneath the Vatnajökull glacier, none of those however within the drainage basin of the Hálslón reservoir. Still the possibility of volcanic activity within the reservoir drainage basin cannot be ruled out with absolute certainty.

No specific legislation or regulations apply to flood design criteria for dams in Iceland. Landsvirkjun has therefore developed their own rules, based mostly on Norwegian regulations for flood design criteria for dams, but adapted to Icelandic conditions (VST et al. 2006). In particular, these have been adapted to the possibility of drainage basins covered partly by glaciers with areas of potential volcanic activity underneath.

I guess if the basin for this reservoir was coincident with the fissure they're watching for this volcano they would have evacuated this area too. They may not get to try out their countermeasures this time. But if they did, what would they be?

Here's a photo from the report showing how the spillway of the largest dam works for a run of the mill hot summer glacier melting flood. What is up with that turbidity?! Doesn't look like the glacial rivers and lakes I've seen. That's got to have ecological repercussions. 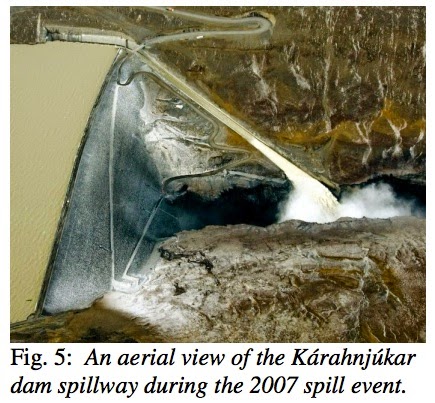 The countermeasure for the magma under the glacier melt amount for one of the smaller dams is called a fuse plug. I never heard of that before, but it sounds interesting. Basically they blast out the rock and then refill the hole with something that is more likely to erode. When the big rush of water comes down the river from the glacier this whole end of the dam washes out and trashes the valley downstream, but hopefully the dam doesn't get destroyed. I imagine that if it overtops the dam the falling water undermines the front side and the whole thing just tips over. They don't really say. Here they explain where they came up with the numbers to use in their calculations.


An even larger flood than that estimated above could result from major volcanic eruption underneath the glacier. As there are no known active volcanoes within the catchment area, no direct data exists to assist in estimating the potential size of such floods. Experience from a major eruption at Gjálp in Vatnajökull glacier in 1996 some 20-30 km west of the Hálslón drainage basin indicates continuous discharge of some 6000 cubic m/s from direct melting of glacial ice by the volcanic activity for several days at the height of the eruption (Gudmundsson, 1997). This estimate is used as a catastrophic flood for the Hálslón reservoir. 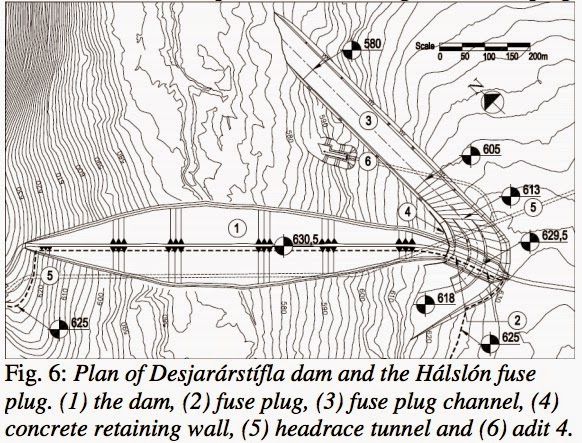 It's all very interesting. I found photos of the big dam on Flickr. They are very good. Then I went to the photographers website, Saving Iceland, which is depressing as hell. Apparently this dam has very bad karma. (The Wikipedia entry is unsurprisingly wrong claiming there are three reservoirs instead of getting that the three dams are all for the one reservoir. Another one for the reservoir gets it right. Lest we forget, check your facts when it comes to Wikipedia.)

Apparently that high turbidity behind the dam ends up deposited on the sides when the water level goes down in the winter. Then comes the wind and it turns into dust storms. It's always something when you try to mess with natural processes on a large scale.

Anyway, now I know more about how to build a dam against the contingency of a magma intrusion melting a glacier. Now I can start referring to the road over the culvert in the creek as a fuse plug.

* Update: Saturday August 23: "A small lava-eruption has been detected under the Dyngjujökull glacier" from Icelandic Met Office. You can see in the map above this is the glacier adjacent to the drainage basin for the reservoir I talked about.
Posted by Beachton at 4:28 PM