When I moved into a house only 12'x18' small I had to go paperless. Instead of notebooks on a shelf I put everything I might want to refer to later on my blog. Easier to search and retrieve.

Last week I wrote a blog about Dr. Means and his attachment to paper in his pursuit of science. And I also addressed questions from his video on National Geographic showing him holding a Ziplock sandwich bag with three small toads inside. It made me curious about these bags. Why don't the frogs suffocate? So I did some experiments. Friday night I tested if the zipper parts leak. I used smoke as a test because I can see it. (Link to Friday test with video) The zipper didn't leak. So that means oxygen must be going in and carbon dioxide must be going out, right through the bag. I don't have any way to measure respiration and permeability, but I thought I could come up with something that would at least produce some gas. I thought about hydrogen peroxide and a potato. That makes oxygen. But I didn't have a potato.  And it might make the gas way too fast. I wanted something pretty slow, like a frog breathing. I do have yeast and sugar. That makes carbon dioxide, and if I use a small amount and don't get it too hot it will be fairly gradual.

Back in the olden days my science teacher was very strict about lab notebooks. They had to be kept in pen, not recopying them for neatness, all original. That's probably still the preferred method because you can't fake it. But I'm not that rigorous and I do everything with my iPhone. I have a complete record to refer to later if I want to. But mostly I do it because it's easy. What's the point of doing science for fun if you make it too much work? I'm going to go through my experiment with you the iPhone way. Realize I'm leaving out a lot of photos for the sake of it's boring.

So that's how I document science experiments with my iPhone! It's way easier than a paper log book. If nothing interesting happens I don't have to put it on my blog. I develop recipes the same way. Take pictures of the scale and the measuring cups as I'm working, then I have that to refer to when I'm writing it up as a recipe with notes saying it's too sweet or too sour so I can use different proportions next time.

As for the permeability of zipper bags to CO2, I definitely think they are permeable. Overnight the control didn't contract where the one pressurized with carbon dioxide contracted enough to allow another 1/2" of pinching (+50% the previous amount of pinching, 1" to 1 1/2"). I think carbon dioxide definitely got out of the bag.

This doesn't say anything about oxygen getting in the bag, but carbon dioxide getting out would be pretty important to anything breathing inside there. I'm no biologist, but I read WWII adventure books about sailors in diesel submarines so that's the basis for that totally non-expert statement.

I'm glad I did the little experiment because I really wasn't sure what would happen. If I'd had more identical little dishes I would have done more bags with increasing amounts of yeast until I got one to blow itself open. I probably could have mixed the yeast right in the bottom of the bag, but somehow that seemed messy. I liked that my little sushi-dipping dishes held the bag upright.

Just for the sake of seeing how fast I could do it, I made a chart. I used Google Drive. Just like Notes on iCloud it's automatically available now on my iPad or to any of you online if I give you the link. I did it really fast. Spreadsheets are my bitch. Here's a screenshot. 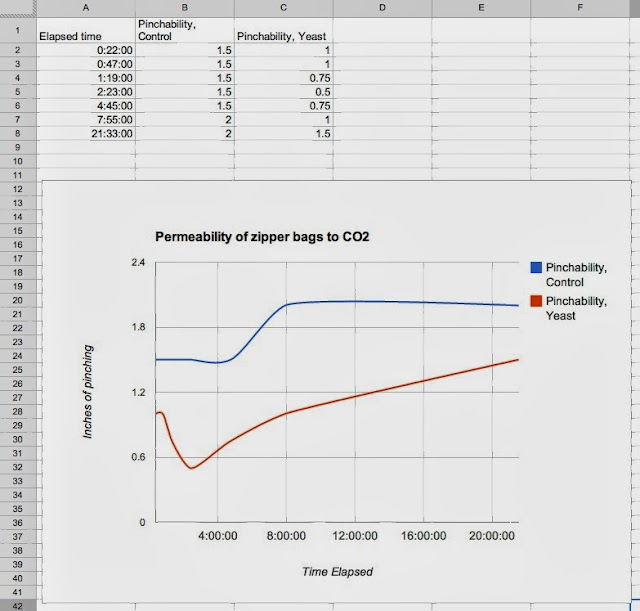 I'm not really sure what my 8th grade science teacher would think about all these ways to create data that literally anybody can alter. I mean, I just clicked a button that says "smooth" and got these lines to look like this. I don't know what it's doing. Since all of this is arbitrary and made up it doesn't matter. But for a real experiment that others will want to replicate or confirm I wouldn't feel comfortable with a tool on the computer like "smooth." I would need to be able to explain the algorithm it was using for that smoothing.

I think the lesson is that all you see anymore is charts and most of them are not meant to be taken as full scale or even based on an accepted measurement. Inches of Pinch is not a legitimate measurement of pressure. I made that up. Realize these things are only relevant as they relate to changes between the control and the experiment, no relation to the outside world. If I want it to indicate pressure I should probably invert the whole thing to indicate an increase in pressure with a decrease in pinchability.

But my back hurts and I want a snack. I think it's fine if random hacks like myself can do some Saturday Science and whip up a half-assed chart all with software that's free and post it on a blog that's free and give it to you to enjoy, for free. Hey, if somebody reads it, does that make it peer reviewed?!