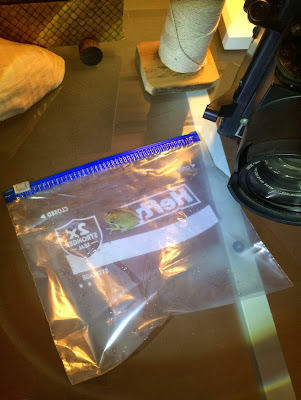 Earlier this week I talked to Dr. Bruce Means about his frog research. I found out he keeps live specimens in quart size storage bags. Seems surprising they don't suffocate. I want to do some experiments to see how oxygen gets in and carbon dioxide gets out. Unfortunately I don't have a lot of chemicals on hand that react with oxygen and put out carbon dioxide. I guess I could put some iron filings in a bag with some water and watch it rust. I'd need a way to evacuate the oxygen first so any rust would come from oxygen permeating the bag. I'm out of dry ice. I have some yeast. I could use that. Yeast would actually pressurize the bag, so if it doesn't explode then it's obviously permeable one direction. Maybe I'll set that up tomorrow.

Meanwhile I thought I might as well check if the zipper leak. I have one thing readily available that takes up oxygen and gives off carbon dioxide — fire. But it also gives off so much heat it melts plastic. But if I make the heat stop then it gives of smoke, which is a good indicator of air leakage. If I can fill a bag with smoke and it doesn't come out through the closed zipper then that's not how the frogs are getting fresh air. It doesn't come out. The plastic itself must be gas permeable, or else the zipper is permeable, but at a smaller scale than smoke particles. I feel like a real scientist because my conclusion is that I have to do more experiments.


Smoke test of a zippered storage bag from barbara tomlinson on Vimeo.