How to Reduce Building Waste with Birdhouses

I've been staying busy this year working with tongue and groove longleaf pine boards on the inside of the new Beachton Blank Works headquarters. I had some 1x6 V groove tongue and groove longleaf pine boards out in the shed leftover from my house. I used those on the South wall, then bought exactly enough to do the North wall. I got 1x4 tongue and groove boards with no V groove to do the ceiling. I gave most of the little scraps to my mother and aunt for the wood stove that is the only heat in their living space. Then I bought the 1x6 tongue and groove flooring and smooth boards to do the West wall. It's almost too hot to use the stove anymore, so I decided to do something else with the cut offs. I got 8' floor planks, but my Spartan is only 7'2" wide on the inside. That leaves enough leftover to make the front and back of a birdhouse, or two sides. I have 52 pieces of flooring, which is enough scraps to make 26 birdhouses. That's enough to start a business! Beachton Bird Works, welcome to the machine.
I started reading up on birdhouses on the internet. I read the birdhouse page on the Department of Natural Resources website for several different states. They all pretty much say the same thing -- birds prefer a natural wood birdhouse and don't like paint, they recommend Hardiplank because it's cool but don't use metal, it's too hot. Well in my experience wrens don't give a shit. They build a nest in the scupper of my white steel rain gutter every year.
And who puts a birdhouse in the sun anyway? You should put it on the Northeast side of the house. I kind of want to try a metal roof, as sort of an homage to my HQ. I want to try to sell these, so I need a shipping box. I found one in my shed that looked like a good size. That's going to be the outside limits.

My first prototype had a 7/8" hole because that's the sharpest spade bit I could find. Northern states recommend a 1 1/8" hole for House Wrens. I found out later than our wrens are Carolina Wrens and they need a 1 1/2" hole. My aunt says they eat mostly spiders, so I'm pleased to have the variety with the largest appetite possible. 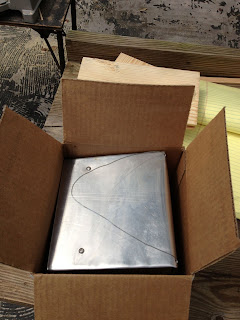 The earliest version had an all-aluminum roof (leftover from patching the Spartan) and it fits in the 6x6x7 Priority Mail box. When I went online to order mailing boxes I found they have a 12x12x8 box too, just as free. I got some of those too so I can make my birdhouses as big as I want.

I found a wren's nest in my shed in an empty space in a jelly jar box. I decided to verify that it will fit in this birdhouse design. 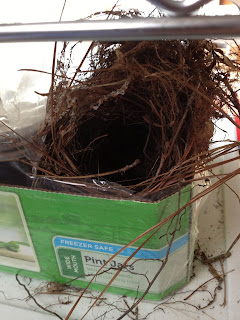 I went back to v 1.0 and did an upgrade. V 1.1 has a 1 1/2" hole and corrugated plastic under the aluminum for ventilation and insulation. 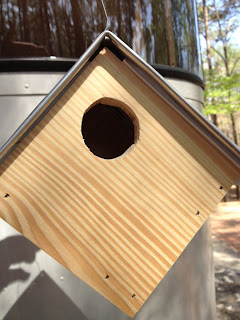 I went to town to use the sheet metal brake so I could try some other techniques. I stopped by Lowes to get a 1 1/2" drill bit and examined the bird houses they have for sale. They don't have much, but all the ones they had, the holes were too small. This one violated all the rules laid out by the bird websites. It's got a metal roof, is not natural wood, is painted white, the hole is too small, and there's a perch. They aren't supposed to have a perch. It just lets predators reach in and eat the babies.


I wanted to try to make one with a Hardiplank roof. I have quite a large stack of Hardishingles left in my shed. I have a shear for cutting it and some backerboard screws that hold it down pretty good. It is very hard to get it attached to the box though. And the ridge cap is an extra complication. And it makes it very heavy to ship.
I made four more birdhouse prototypes after this, trying to find a roof technique that is easy to install. I tried tongue and groove, and a solid 1x8 that I found in the shed. Neither of these really worked for me. The solid wood was already cupped from being in the shed for six years. If it had been out in the weather it would be even worse. I tried another technique using the cutoffs from the west wall of the Spartan.

I had another idea to use some leftover galvanized steel ridge roll from the 2010 mini-shed project. I used all 3/4" x 3 1/4" boards cut to 4" long for the sides.
My aunt has been offering up opinions on these designs when I email pictures to her. So far she really doesn't like any of them. This is her idea of a proper birdhouse. The wood looked just like mine when it was new. But she didn't use any stain or sealant. Also her roof is going end grain out. I could try that.

I could do more rustic birdhouses after I use up the scraps from my project. I have some old wormy wood in the shed. Or I could keep making them of pine and hang them out in the woods for a few years before I sell them. Is there a market for pre-weathered birdhouses?

After making 6 prototypes without any one of them jumping out at me as superior in aesthetics or manufacturability I decided it was time to do some science. I like the metal roof as a novelty, but is it going to be dangerous to the birds? Will it get too hot? I can't stop somebody putting it in full sun and I'd feel bad if they had dead baby birds. So I'm going to do thermal tests on these prototypes before I go on to the next versions. I should have gotten the weathered one from my aunt but I didn't think of it until too late.