It has rained about 11 inches since last Friday. We have been in a drought so bad my 90 acre pond was completely dry. This much rain created some decent sized puddles, but I could still walk across it in my BP Oil Spill boots.
I went down there Sunday after only 8 inches of rain and made a video to capture the frogs. This is shot from the right side of the photo above.


I didn't see any individual frogs that day. I have tried so hard my whole life to see a frog blow up his throat like they do on the Nature TV shows but I have yet to see one. The thing is they shut up and hide when you try to get close to them. But today I guess they were just so enthralled in their courtship they ignored me. I had never even heard of this kind of toad before until today, the Eastern Spadefoot Toad, Scaphiopus holbrookii. Apparently when there's a drought they dig a hole and wait it out. Then when there's a lot of rain they have a giant freakin' orgy. 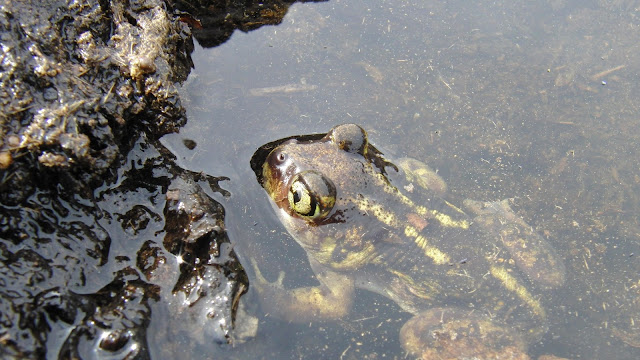 There's a nice identification page courtesy of the Savanannah River Ecology Lab Herpetology Program. They have recording of the calls of the different frogs. I can hear these four frogs calling at the pond. I would expect bullfrogs and leopard frogs too, but I don't hear any.

Description: The Eastern Spadefoot Toad is a large toad, ranging from 1.6 - 3.1 in (4 - 8 cm) long. Their skin is smoother and moister than other toads and is speckled with tiny warts. This species varies in coloration tan or yellowish to dark brown, without bold spots (as in other Southeastern Toads). They usually have two vertical light lines running from the back of their eyes down their dorsum, forming an hourglass shape. The lines are generally more brilliant yellow in males. The characteristics used to immediately distinguish this species from other species of toads are their bright yellow eyes with elliptical pupils (like cat eyes) and the dark spade, which is used for digging, on each hind foot.

Range and Habitat: Spadefoot Toads are found throughout the eastern United States. In our region they are most abundant in the Coastal Plain and are found in scattered populations in the Piedmont but are absent from high elevations of the Appalachian Mountains. This species prefers dry habitats with sandy soils but can be found in almost any habitat. Their ability to remain buried for long periods allows them to persist even in suburban and agricultural areas. Spadefoot toads breed in fishless water bodies and can even successfully breed in large puddles and roadside ditches.

Habits: Spadefoot toads are extremely fossorial, spending most their life buried underground and are explosive breeders. Heavy rains, occurring at nearly any time of year, cause them to emerge in large numbers and congregate at breeding in wetlands or ephemeral pools created by the rain. Males call while floating on the surface of the water. Females can lay up to 2,500 eggs at once. Tadpoles grow very quickly and can undergo metamorphosis in as few as 28 days. Data from the Savannah River Ecology Lab have shown that this species is very long lived and populations often go for many years without successful reproductive events.

Call: The call of the Spadefoot Toad is a low-pitched "waaah," repeated on short intervals.


I made another video today. It's not my best work.