I've been looking into this Loneliest Whale story. @NubianOR Tweeted a link to this website that said this:


Dubbed “52 Hertz” after the frequency range in which he typically sings, the animal has been called the loneliest whale in the world, since his love songs seem destined to go unanswered. Most other species of baleen whale, such as blue whales and humpbacks, sing at frequencies much higher, between the 15-25 Hertz range.

Well that's clearly stupid. 52 Hz is higher than 15-25 Hz. But it's all still really low bass. I've heard recordings of whale song. I didn't think they were that low. If they were I would make a business selling subwoofers to oceanographers. Most of them listen to the sounds on shitty computer speakers that can't produce anything below 100 Hz. Actually, they mostly look at them as waveforms or spectrograms.

First step in addressing skepticism is to find more stories about the same thing. This one was copied verbatim from Animal Planet. Where else is it? Here it is on EarthSky, which does those little snippets on NPR. It said the same thing, only reversed it and said 52 Hertz is lonely because he sings so high. Then they played a sound clip of what a normal blue whale sounds like. Which was definitely NOT 15-25 Hz. I mean, I could hear it. My speakers don't go below 100 Hz. The idea that anybody listening to EarthSky could hear 15 Hz is a long shot. I hear people driving by on the highway 1/2 mile from my house who have stereos capable of producing 15 Hz, but I am pretty sure they aren't listening to NPR in there.

Did they mean 15 Hz -25 KILOHertz? Which, well, that's everything you can call sound. Or do they really mean it's just a 10 Hertz rang? A burp if you will. Are all of the clips I've heard of whale song sped up to a higher frequency, like what they played on EarthSky? Are they really as low as 15 Hz? I mean, it makes sense that they would be. Low frequencies travel much much farther, as shown by the stereos of the cars on the highway. I only hear what's below 100 Hz. But I thought whale song was at least several octaves. I studied under a bona-fide marine mammal acoustics expert. If I got my Masters degree without getting this straight then I am very disappointed. I really thought the baleen whales made a full spectrum of sounds. We study the toothed whales more, but humpbacks are pretty seriously studied.

Well let's get to the bottom of this. Show me some spectrograms. NOAA has some online. These don't go above 500 Hz! Maybe it's because this is the outfit looking for seismic sounds. Let's check the biological oceanographers.

Here's the story on NY Times. They give the name of a biologist at Woods Hole, Mary Ann Daher. Let's look her up. That was sort of a dead end. All the same story rehashed. She did release this story after she found these sounds in some declassified Navy recordings she was studying. (You know those free telescopes NASA just got that were for spy satellites but turned out to be obsolete before they were finished? The Navy probably has information about what goes on underwater that makes regular university oceanographers look as ignorant as the cast of Jersey Shore. Such a shame that so much money is spent on science that is kept a secret and so little on things we can share!)

I googled "humpback audiogram" and got good results. I figured if I looked for the whales range of hearing it would relate back to the noises they make. I opened a PDF about a bioacoustic assessment because I thought I would understand that.

Thank goodness. That was what I thought. For a minute there I thought I'd spent $8000 on a master's degree and came away unacceptably ignorant.  I think what we have here with the Lonely Whale story is just a spasm of extremely bad science writing and not me being wrong. Acoustics is really not well understood. It is sort of unpopular. I was only one of two students studying it when I was in undergraduate school. I don't understand at all. I think it's fascinating.

But they were comparing 52 Hz to a blue whale as well. Let me look those up. Found a paper paid for by Canadian defense. It has a handy chart outlining the delta frequency and center frequency of the main types of sounds all the baleen whales produce. I can read it but I sort of doubt any of the people that wrote those articles about the lonely whale would have a clue what this says. Here's the blue whale chart. 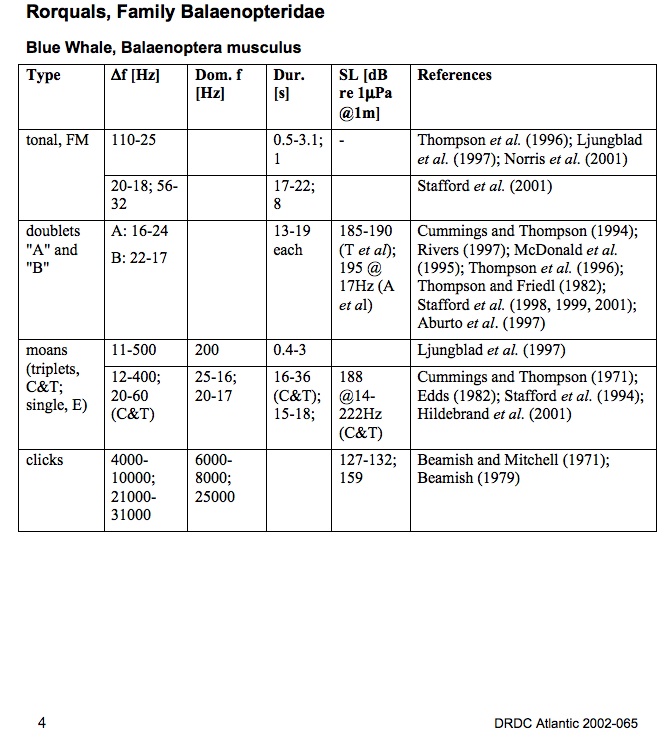 The important bit I think is these doublets. Those are indeed in the range specified in the articles. This must be what matches the sounds they are attributing to 52 Hertz. Kind of ridiculous to leave out all this other sound though. That's a huge range of over 11 octaves. Saying blue whales only make sounds between 15 and 25 Hertz is like aliens made of pepper coming to earth and reporting back that the only sound humans make is sneezing.

Here's the thing. You can only record those sounds very close to the whale. If they're basing these statements about 52 Hertz on recordings from fixed hydrophones and the whale was always far away from them then they don't know shit. Even if he was making a large range of sounds they wouldn't be able to detect them. All they know is he doesn't make any lower than that. Which could be a birth defect or injury or something. I think there are way too many unanswered questions in this story to even speculate that this is one weird whale on his own.

What's the voice got to do with it? You think Jennifer Tilley is lonely? And considering how long they've been hearing him he's clearly getting along pretty well. I think it's dumb to anthropomorphize him as some kind of pathetic creature, the BFG of the sea, eating sea cucumbers by himself because he doesn't approve of his relatives eating other whales. (That's a toothed whale thing, so it's kind of a bad analogy.) I'm not even convinced it's a whale at all. I bet the Navy doesn't even think it's a whale. It's probably just a Hunt for Red October-based inside joke.

Kind of a shame EarthSky didn't explain that what they were playing wasn't actually the frequency they just stated. Just goes to show, just because it sounds like science doesn't make it accurate.