I am on the side of my skeptic friends as they rail against the anti-vaxers, but I don't really have a very strong emotional connection to it. Maybe because it's closely connected with the health of people and I don't really identify with people that much. But today when I saw this headline in my Fine Homebuilding email newsletter I had to click it. Attacking technology makes me furious. 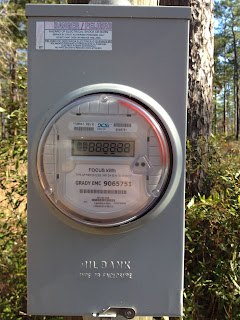 "What? That's idiotic!" I thought. I have a smart meter. Well, I guess that's what it is. Apparently this term means different things to different people. In it's most advanced form individual appliances would have computer controlled relays on them so when the power company restores power after an outage they can make sure every single air conditioner on the system doesn't kick on simultaneously. It's just good engineering to stagger them over a few minutes, it's not an invasion of privacy. In my case it's not that advanced. My meter reports when it has power and so when it doesn't they can analyze power outages. My power went out twice in the last two weeks, but it's no big deal. I don't have to call the power company. I just switch off my computers and the beeping battery backup units and wait. They know which line has a tree on it because they can see which meters are down. They send a crew to fix it. It usually comes back on within an hour or so.

The other thing it does is report the kilowatt hours used. I live 15 miles from town, out in the woods down a 1/2 mile dirt driveway with a locked gate. I was delighted that my power co-op installed an electronic meter when I first built my house. It's been there since 2005 when I got temporary power to build my house. How else are they going to know how much to charge me? Send a man out here in person once a month? That seems like the personnel cost alone would practically double my $40 a month bill!

There are a lot of different kinds of digital meters with enhanced features, some that transmit their data over the power line, some over the air. The over-the-air ones used to be a short range deal where a reader drove around the neighborhood and pinged each meter from a truck. I used to know about these things back in the 1990s because Schlumberger had an office near my house in Atlanta. I had an interview with them once. I haven't caught up my knowledge entirely, so please don't think I'm claiming expertise. This is just me expressing my gut reaction. My quick research didn't tell me the details of the operation of my meter nor could I confirm any of the ridiculous sounding claims the opponents are making.

They smart-meter opponents say on this tea party website say the radio transmitter is going to give them cancer and that the power company can tell what TV show they're watching and turn it off if they want to.


When I first reported the installation of smart meters in Georgia in the February 4, 2011 issue of Georgia Insight, the project had been under way since 2008, under the radar. In places smart meters were installed, most occupants had no idea their meter had been replaced or that the new one is a two-way radio frequency communication device. They didn’t/don’t know it emits radiation 24 hours a day around the clock, deposits electrical “noise” and high-frequency spikes throughout the wiring and is remotely read every 15 minutes (96 times each 24 hours).

After running errands April 20, 2010, we accidentally learned that our analog meter was gone. The clue: our digital clocks were blinking. Georgia Power had shut off the electricity to install a smart meter on the outside wall, 14 feet from the location of our bed on the same wall inside.

In September 2010, my husband Robert was diagnosed with skin cancer for the first time in his life. He had surgery. At his first three-month check-up, the plastic surgeon found two more spots of skin cancer, which were, subsequently removed, as well. His six-month check-up will be in September. Also, both of us experience continual ringing in our ears.

I need to work on my skeptic response to this topic. The first thing I think of is to tell them to shut up about the radio frequency transmission because they can just walk under the transmission line with a compass if they want to see electromagnetic effects. The radio in the meter seems trivial to me compared to the actual electrical power coursing through the wires. That's probably not a good argument. And as for the stuff about skin cancer? Well that just tells me this person is an idiot and probably can't be educated. Also, I've had my automatic meter since 2005. This is not a new conspiracy. This is just good management.

I clicked the link in the Fine Homebuilding article to the Stop Smart Meters website. There is no sentence in there that doesn't make me mad. This paragraph is particularly good.


Do you care about wildlife and cutting carbon emissions? Smart meters do not result in energy savings, according to Reuters. They may even increase energy consumption. There is also emerging evidence that wireless, non-ionizing radiation (from cell phones, wifi, and ‘smart’ meters) harms wildlife and damages trees.

What the hell are they TALKING about? The power company clears giant swaths of the forest and has a Bush Hog mower on a 30 foot articulating arm to mangle trees that encroach on the right of way and these delusional people think the RADIATION is damaging trees? This is the sacrifice we have to be prepared to make if we want food kept cold in refrigerators, lights at night, fresh water pumped out of the ground to drink, and all the other wonderful things we do with electricity. 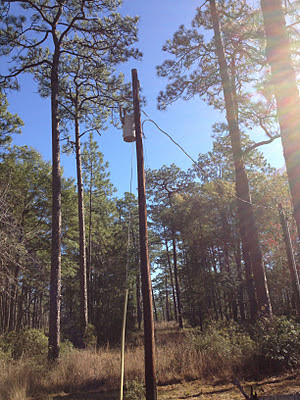 Look, if the tea partiers are proud to be Americans why don't they want a technologically advanced power system that shows our engineers are the best in the world?

If you want the freedom to watch Fox News in your house you have to have electricity and radio frequency radiation. What the hell do you think TV is?! Those big towers BROADCAST it right out into the air all day every day.

I think it's wonderful that I can get electricity and a phone line for DSL at my house without paying the actual up-front cost for the poles and conductor and the man with the equipment to put it in. It does make me proud to be an American. And when people tell me that I should have solar panels and go off the grid I get defensive. That would cost more than my whole house! That is no kind of way for this country to get ahead. We have to invest in our power system and increase efficiency for the whole grid. Each individual spending $30,000 on solar panels is not fair to those of us who are trying to live 4 years on $30,000. It would be much better if the utility company could do something on a large scale and sell me just a little bit of it every month.

My electric utility has 3292 miles of line and 18,623 meters. That's less than 6 meters per mile of line. America is HUGE and not all of it is in the city. Technology is actually even more important in the rural areas than in the city when it comes to power distribution. I hope nobody scares my neighbors about smart meters. They are already prone to believe insane shit like planets are coming to smash into the earth. I'm expect somebody telling them smart meters make their ears ring would give them suggestive tinnitus on the spot.

I am just not worried that my utility is invading my privacy by knowing how much power I use. This is a company that still has a website that says "This web site best viewed with a screen resolution of 1024x768." There is just no way they have the inclination or technology to save and analyze constant energy usage information. They need all the support they can get, not attacks by paranoid and ignorant people.

* Update 1/22/2012: New article on IEEE Spectrum site says the smart grid will be seen as a failure if all it does is reduce meter reading costs. I wonder if people even grok the reliability improvement? If their power still goes out frequently, even though it's shorter times, probably not. It is a dilemma. All they respond to is lower cost. When it gets abnormally cold for a month they get a huge bill and claim it's a mistake. People really have no clue. I think what will make 2012 a good year for the smart grid is very mild weather.
Posted by Beachton at 12:36 PM