March for Science on Earth Day

They set a date for the March for Science today. It's going to be Saturday, April 23rd, which is Earth Day. It seems like a pretty benign good thing. Everybody should be for it. But here I am writing a blog post because some white men can't catch a clue in a butterfly net.

First of all let me document for posterity my most valuable suggestion. The hat of choice for the March on Science shall be the boonie hat. Available on Amazon in all sizes and colors. Why? Because that's what the archeologist and the astrophysicist wear on Stargate SG1. That's how you can tell the dweebs from the straight up soldiers. 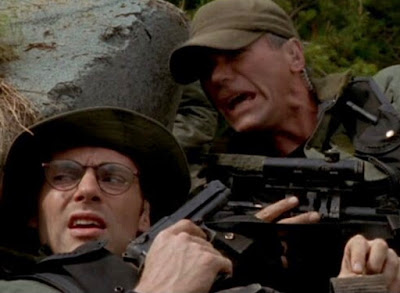 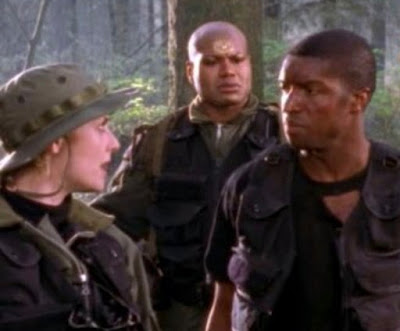 And now back to the origin stories of the March for Science. After the original hurdles of a rough draft logo and a website with disagreeing apostrophes, the organizers did what I always recommend to my editing clients -- rewrite. 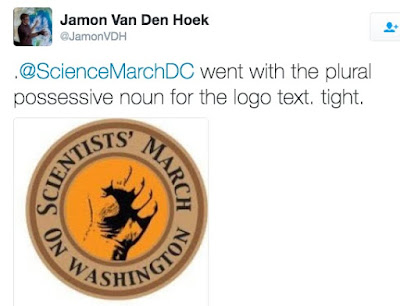 Now instead of Scientists' March on Washington they quickly modified it to March for Science and looks like they got a real logo designer. If any scientist besides me is bothered by the fact that this orbital ring notion of atoms is no longer valid, let's just keep it to ourselves. I like the colors. 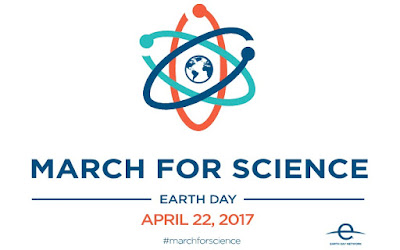 Early on in their existence the diverse group of anonymous organizers of the march had a Google Hangout and decided to announce that diversity is important.

And that's when the white men started throwing their shit in the fan. I saw it on my twitter feed with the enlightened white men getting berated by the touchy white men who have not examined their privilege. 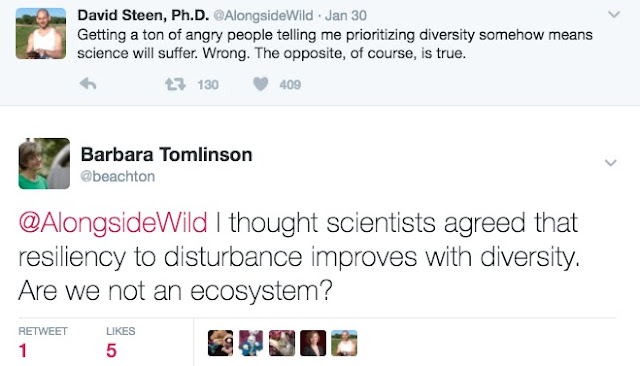 Then the march organizers used a word that REALLY set off the white guys.

I had to look up intersectional the other day when one of my Twitter friends said she finally understood intersectional feminism because she's Mexican and a woman. What intersectional means in this context is that a lot of people are not just screwed for one easily defined thing, a lot of us are DOUBLY screwed. For example, I didn't even know I was screwed because I was a woman when I was in my 20's because I was working all my white youth privilege. I had to also be OLD before I found out that I was hugely disadvantaged in the workplace for being a woman because ageism and sexism is intersectional. And by old I mean 32 years old, because that was the end of the road for me in high tech. Before then I think men hired me just for the novelty of having a young blonde in a short skirt in the lab. After, well, I admit it, they moved the factory to Mexico and closed the lab. But still. I couldn't get another job in a different industry because of various versions of "she'll just get pregnant and quit" and "she's actually not a very good secretary." Yeah, I know, I forgot to book your flight, I'm a terrible secretary. That's because I'm a scientist. It's a different skill set, you sexist idiot. Have some respect for secretaries.

That's why I'm grumpy enough to consider a march. I've been stewing over this rage for a really long time.

But the white men keep pissing on our parade and don't even have the courtesy to call it rain. Here's Robert S. Young in an article for the New York Times who thinks it's a bad idea. A Scientists’ March on Washington Is a Bad Idea.

In 2010, I was a co-author of a report for North Carolina’s Coastal Resources Commission that said sea levels along the state’s coastline could rise by as much as 39 inches by the end of the century. That conclusion was based on the best peer-reviewed science and was intended to help policy makers plan for the future.

But it alarmed real estate and other economic development interests, which quickly attacked the report. The coastal commission ignored it. The authors, myself included, were widely slandered. And the Legislature passed a law that barred state and local agencies from developing regulations or planning documents anticipating a rise in sea level. “I think this is a brilliant solution,” the comedian Stephen Colbert said at the time. “If your science gives you a result that you don’t like, pass a law saying the result is illegal. Problem solved.”

OK, I have SO been there, man. I did my master's thesis on beachfront property in Walton County building illegal sea walls. Back in 2007 I was on the beach when contractors were laying the first level of dry stacked blocks in front of a condo. Not only did they not have a permit for that work, there were three very good reasons those condos could NEVER get a permit. First that kind of wall is strictly prohibited. Dry stacked blocks on the beach? Are you fucking kidding me?! Second the buildings were built on deep piers and are ineligible for a sea wall, full stop. I called the enforcement agency on the spot and told them to send the sheriff immediately to stop this illegal activity. They didn't do it. They let them finish the fucking wall. I bet it was destroyed by the storm system last weekend and it's a giant mess right now. And I have to tell you that makes me want to scratch some expletives on a poster board and wave it over my head in the street! I have been furious about shit like this for a decade already! I want to raise some hell! It doesn't make me think, "Nah, I don't want to upset the poor rich people." But that's what the author of the NYT story thinks.


Rather than marching on Washington and in other locations around the country, I suggest that my fellow scientists march into local civic groups, churches, schools, county fairs and, privately, into the offices of elected officials. Make contact with that part of America that doesn’t know any scientists. Put a face on the debate. Help them understand what we do, and how we do it.

One fun raindrop in the fry oil of the early days of the March for Science was Steven Pinker with this painful Tweet thread. The good stuff in in the comments. You need to click the link if you want to see it unfold in all it's privileged horror. 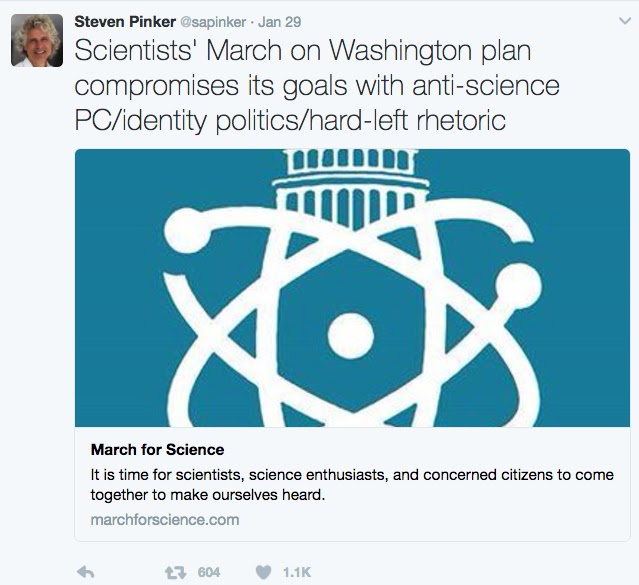 
For the full analysis I give the floor to Danielle Lee, with this glorious tweet thread. 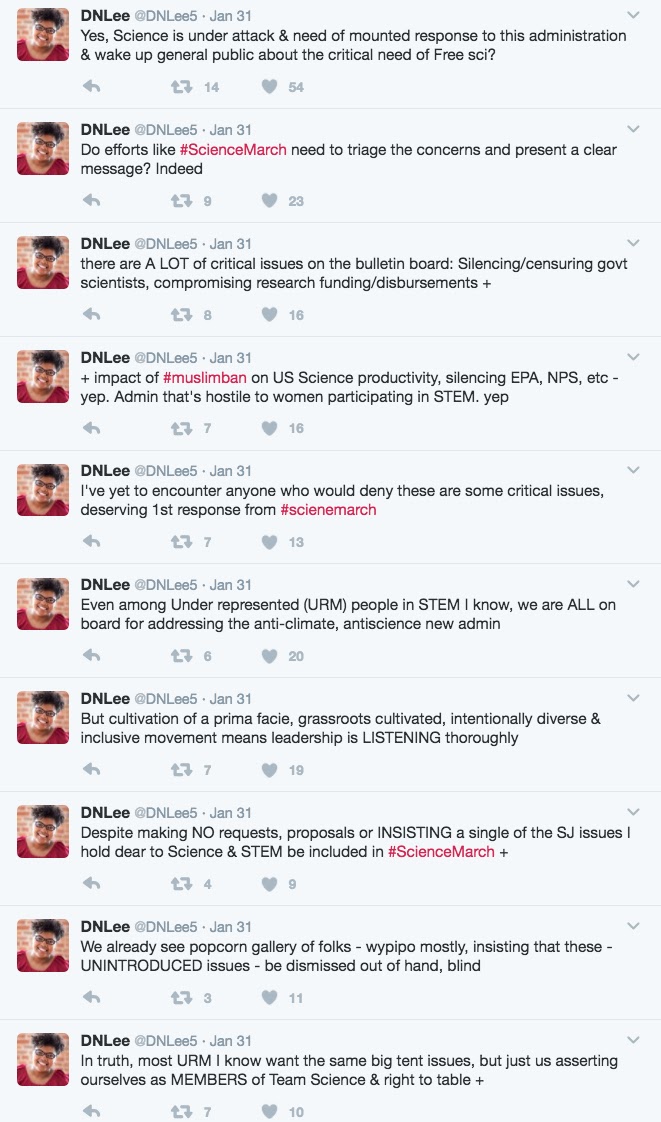 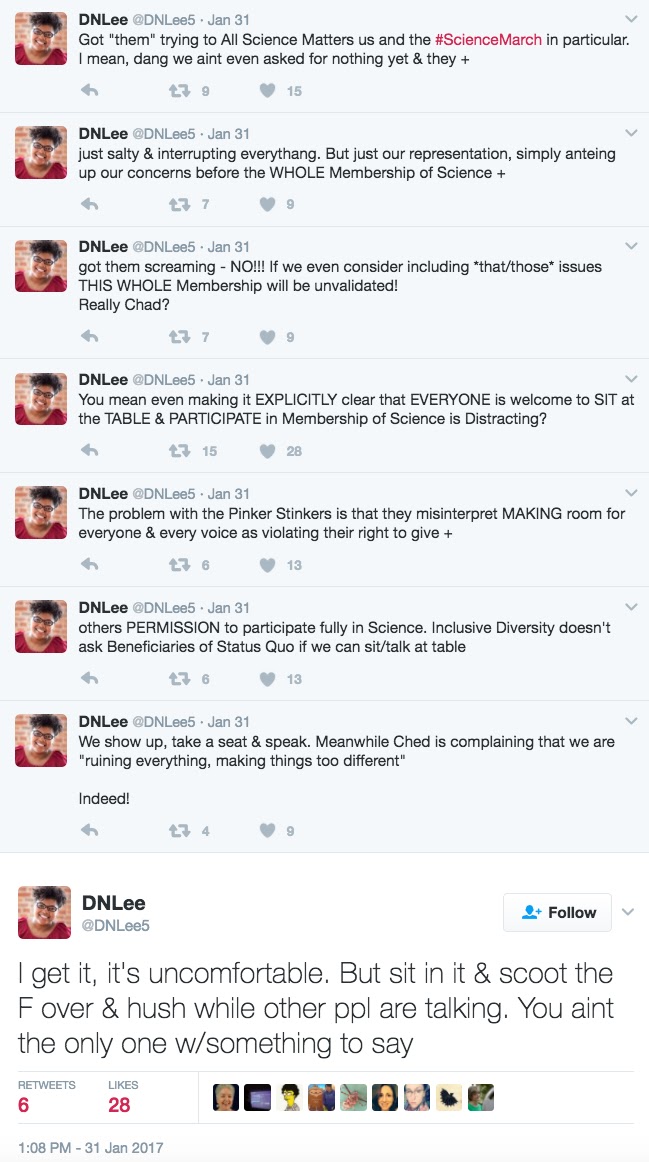 I notice just now in a new tweet Steven Pinker acts like his disapproval made The March for Science people change their mind. 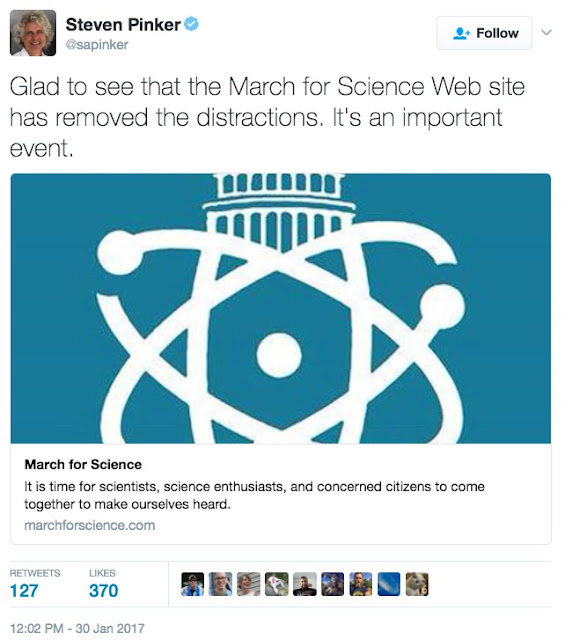 Nah, dude, they just moved the statement to the tab labeled Diversity on the blog header. I can see how it never occurred to you to click that since you have all your privilege fully deployed. Goddam it. Fuck. All. Y'all. Get out the way and let us angry people do this. And make your own goddam travel reservations. Why you so stupid? I am too short for this shit.

In the past days, scientists have voiced concern over many issues - gag orders for government science agencies, funding freezes, and reversing science based policies. We recognize that these changes will differently and disproportionately affect minority scientists, science advocates, and the global communities impacted by these changes in American policies. Addressing these issues is imperative in understanding how recent developments will affect all people - not simply the most privileged among us. We take seriously your concerns that for this march to be meaningful, we must centralize diversity of the march's organizers at all levels of planning. Diversity must also be reflected in the march itself - both through the mission statement and those who participate.

At the March for Science, we are committed to highlighting, standing in solidarity with, and acting as allies with black, Latinx, Asian and Pacific Islander, indigenous, Muslim, non-Christian, non-religious, women, people with disabilities, poor, gay, lesbian, bisexual, queer, trans, non-binary, agender, and intersex scientists and science advocates. We must work to make science available to everyone and encouraging individuals of all backgrounds to pursue science careers, especially in advanced degrees and positions. A diverse group of scientists produces increasingly diverse research, which broadens, strengthens, and enriches scientific inquiry, and therefore, our understanding of the world.


Footnote: In quoting Terry Pratchett above I was reminded of another quote. (Cuddy the dwarf in Men at Arms says "Why you so stupid? I am too short for this shit."Also, while I'm giving citations for quotes, that saying about pissing is a Sigourney Weaver line in Avatar.)

"Angry people are not always wise." I know this one from one of my aunt's books where she says I quoted it by heart from Pride and Prejudice, which I am sure I never did. But I went hunting the quote to find the context. Rem acu tetigisti. This is what we need right now. We need Mr. Darcy to stand up to people who would accuse us under represented people of intolerable self-sufficiency.

"How very ill Miss Eliza Bennet looks this morning, Mr. Darcy," she cried; "I never in my life saw anyone so much altered as she is since the winter. She is grown so brown and coarse! Louisa and I were agreeing that we should not have known her again."

However little Mr. Darcy might have liked such an address, he contented himself with coolly replying that he perceived no other alteration than her being rather tanned, no miraculous consequence of travelling in the summer.

"For my own part," she rejoined, "I must confess that I never could see any beauty in her. Her face is too thin; her complexion has no brilliancy; and her features are not at all handsome. Her nose wants character--there is nothing marked in its lines. Her teeth are tolerable, but not out of the common way; and as for her eyes, which have sometimes been called so fine, I could never see anything extraordinary in them. They have a sharp, shrewish look, which I do not like at all; and in her air altogether there is a self-sufficiency without fashion, which is intolerable."

Persuaded as Miss Bingley was that Darcy admired Elizabeth, this was not the best method of recommending herself; but angry people are not always wise; and in seeing him at last look somewhat nettled, she had all the success she expected. He was resolutely silent, however, and, from a determination of making him speak, she continued:

"I remember, when we first knew her in Hertfordshire, how amazed we all were to find that she was a reputed beauty; and I particularly recollect your saying one night, after they had been dining at Netherfield, 'SHE a beauty!--I should as soon call her mother a wit.' But afterwards she seemed to improve on you, and I believe you thought her rather pretty at one time."

"Yes," replied Darcy, who could contain himself no longer, "but THAT was only when I first saw her, for it is many months since I have considered her as one of the handsomest women of my acquaintance."

He then went away, and Miss Bingley was left to all the satisfaction of having forced him to say what gave no one any pain but herself. 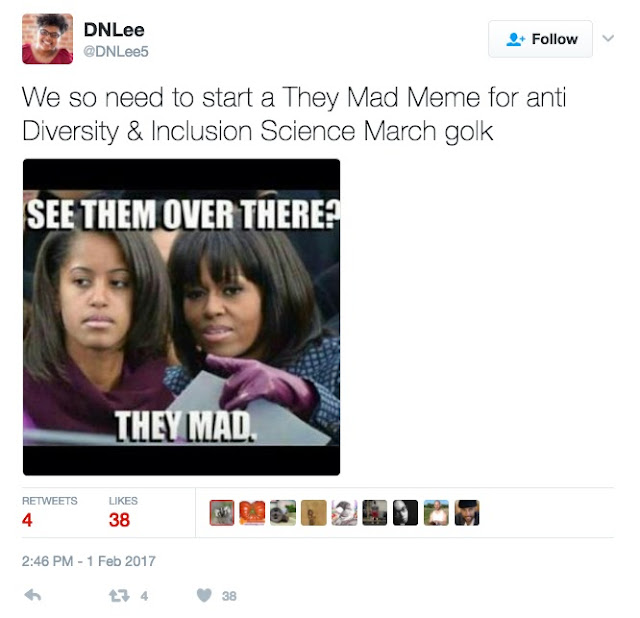