Empathy for my Future Self: New and Improved Lab Entrance

I got a case of Titebond Polyurethane Fast Set Construction Adhesive in the mail two weeks ago. I was one of the first 50 people to email them after they talked about the product on the Fine Homebuilding Podcast. The shelf life on this stuff is only a year, so I was a bit worried about how I was going to use it up in time. I mentioned it to my brother and he said to bring it to him so he could use it between concrete blocks for a retaining wall around his pool. It needs to be high strength so he can compact the soil behind the wall and install pavers. I hadn't thought of using it for concrete blocks. Good idea.

The other day I missed the last step on my shitty back steps and hurt my foot. I mean, it was messed up. I looked up orthopedic treatments on WebMD and everything. Amazingly the ice worked great and it was all better in just two day. But while I was hobbling around with a walking stick for a day I really regretted that I had no handrails to help me in and out of the lab. Also I blamed myself for considering steps a luxury I couldn't afford. Were a couple dozen $1.69 cinder blocks more precious than my continued mobility? That's illogical. I resolved to fix them. I started with a dozen concrete blocks at Home Depot and started playing around with how to stack them around the doorway. I came up with something like this. By messing with the orientation of the lightweight blocks I planned to block all the openings so critters can't fill them with acorns. Which they have happily been doing for the past two years. 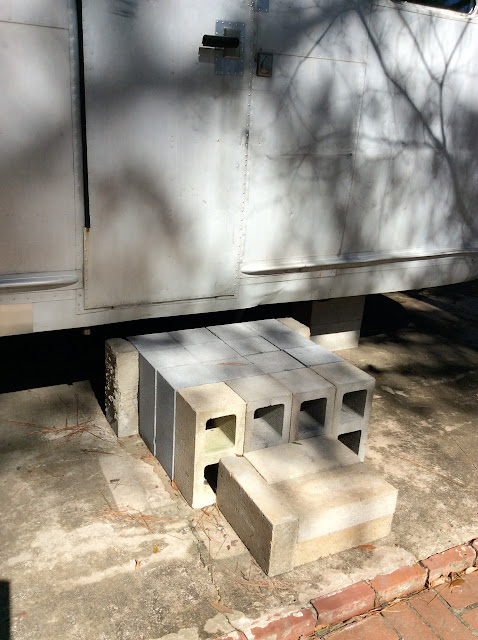 One one side I have to put solid blocks to cover the end. I made another run to Home Depot and got more supplies. I needed another whole row on the hinge side of the door and a lot of caps. 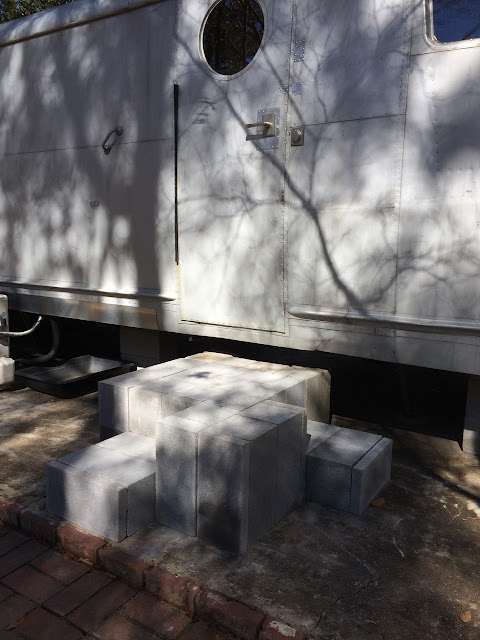 When I got back with more blocks I played with my arrangement some more. I had to work in something to hold onto. You can see in the above photo that I already have a cast aluminum handle screwed to the side of the Spartan to stop the door lever from slamming into the side and making a hole. Secondarily if you lift the door lever and drop it behind the handle on the wall of the Spartan it holds the door open. I decided to order some more of those same style cast aluminum handles since they were working well. I ordered two of the longest ones they have at McMaster. They cost around $20 each, more than all the stair components combined. While I waited for the UPS man I kept working on the steps.

I decided not to use the four old cinder blocks. They don't match the new ones. If I'm going to this much trouble it better look nice. But I was ready to glue caps on one side of some of the blocks. I did that in the morning so the glue could cure while I went to town.


I used this method on a tube of this stuff after I secured a plastic door threshold at a client's office two days before the step project. The adhesive had barely even skinned over under the foil. I had to squirt out about an inch worth and throw it away. I will update this post when I try to use the half tube put away after this job. Two days definitely fine.

This product does not have an offensive odor to me. It's has the same lack of smell of other polyurethane glues. It's nothing like Liquid Nails construction adhesive that stinks like a silk screen shop. It's still good to have a lot of ventilation though, and wear gloves. It will stain your skin as bad as Great Stuff.

Mark Schroeder, the Titebond VP of Marketing, mentioned on the FHB podcast that they worked on the consistency so it doesn't keep shooting out of the nozzle when you put it down. I had no problem with that at all. Very well behaved stuff. I confess I probably have muscle memory for releasing the pressure when I put down the gun though. I probably automatically hit that lever on the back whenever I finish running a bead so I didn't really give it a chance to make a giant mess.

I wanted to stick the blocks to the slab with something that would even out the surface so they wouldn't rock, but I may need to disassemble this whole thing one day. I'm not using the construction adhesive there. It's way too sticky and doesn't have enough body to fill in gaps. I started on the main section using up some rapid set cement I had leftover from a septic tank repair. I only had enough for the main rectangle.

For the rest I used some polymer modified thinset leftover from the tile floor. I keep it in a 3 gallon bucket so it doesn't go bad. I prefer working with it so much I'm not even showing photos of the other stuff.


After the steps were all done I left them overnight. I came back the next day to work on the handles.


The weird shape of the top step lets me grab the handle from the ground and then step right foot on the first step, left foot on the second step. Then I'm standing out of the way to open the door.

"Tetris" is not a valid step shape for a house built to code. But this is not a house. I'm not going to get a ding on the inspection report when I try to sell it. If I sold the lab it would require knocking these steps loose to put the whole thing on a flatbed and send it away.

I'm already used to alternating tread stairs because of the ship's ladder to my loft in my house. To me it feels natural. I asked my aunt with the bum knee to come over and try it out. She gave it the seal of approval. She appreciated both the handles.

If the climate situation keeps going this way I will never have a problem with freeze/thaw cycles. I don't think it's going to freeze again this season. There's a lot of thermal mass here too. When it does freeze here it's only for a few hours. I don't expect the underside of these blocks on the south side of the lab to ever get below freezing.

I've been using the steps for a few days now. I mostly come from the non-handle direction and go straight in without grabbing any handle. I like being able to open the door from the top step. Now that I'm ready for inevitable infirmity I will probably enter an extended period of peak health. I would say my enhanced grace and lack of clumsiness is assured, but that pyrex pie plate I smashed in the kitchen sink this morning says otherwise.