I got in my car and drove about 5 hours last Wednesday to go see a Delta IV Heavy rocket launch from Cape Canaveral. That's the biggest, fastest rocket currently available to launch things into space. It was launching the test setup of the Orion capsule. (I got to see it up close in 2011) It would go farther and faster than anything designed to hold people has gone for 45 years. I guess it's my cynical nature that makes me think we've failed for the past 45 years, not that we just accomplished something. It's the same feeling I get when my old professors retire and they just stop teaching that subject. No Dr. Payne? No Psychoacoustics class. No Dr. Braden? No more Physics of Photography. Letting knowledge, skills, and experience just go away offends my intellectual nature. If building Orion is the only way to pass on the knowledge of how to build a Gemini style heat shield then I don't think it's a waste of money even if the program gets cut later and nobody ever goes to space in a capsule like that.

Phil Plait expressed his serious misgivings about Orion and the yet-to-exist Space Launch System that would power it into space. I don't disagree with him, but if not this, what? The engineers that have experience sending things to space need to be working with new engineers, need to be sending things into space. I don't care if it is the wrong thing, an underfunded thing, a failure or a success, as long as the new engineers are learning what the older guys know so their own ideas carry us forward. It's a job for these engineers and they get hands on experience making a thing for going to space. It just went to space. They must feel good about that. They deserve it. Given a chance they are better equipped to make something better because of the experience building this thing.

In the post launch press conference a reporter from The Guardian asked Bill Gerstenmaier how much sooner they'd be ready to launch people into space (and bring them back) in Orion if they had a bigger budget. He said it's not happening in a serial fashion just because they can't afford to hire more help, it's happening that way because they need certain research to be completed as input to the next stage of the design. Scott Kelly needs to stay on the space station for a solid year, for example, before they have all the data they need to determine the proper specifications for the habitat module that ESA is going to build based on their cargo ship.

I get the impression that they are keeping their options open. They seem to be enjoying the luxury of management being actual engineers. Back in the '90s when I worked in consumer electronics we used to joke that managers thought you could get nine women pregnant and have a baby in a month. I told that to my friend the spacesuit engineer and he said he'd never heard that joke. Must be nice.

Somebody in the press conference mentioned that the heat shield is tedious to manufacture. It's a honeycomb type thing and each cell has to be filled by hand – in my mind I'm imagining West System epoxy in a syringe, I don't really know what it is. So they are trying better ways to manufacture that. The next Orion that launches into space won't be the same as this one. If you do something in a hurry you don't have the luxury of trying new things. You over-design it, see if it survives potentially destructive testing, then lock that down and work on whatever didn't pass. Since they don't pay these engineers very much the least they can do is shoot something they made into space from time to time. What else is going to motivate them to not just leave the space program to get a better paying job?

I went to the launch attempt Thursday and actual launch Friday with a friend who has a Johnson Space Center badge. He got a placard to allow him to park on the NASA causeway for the launch. I brought the folding chairs. 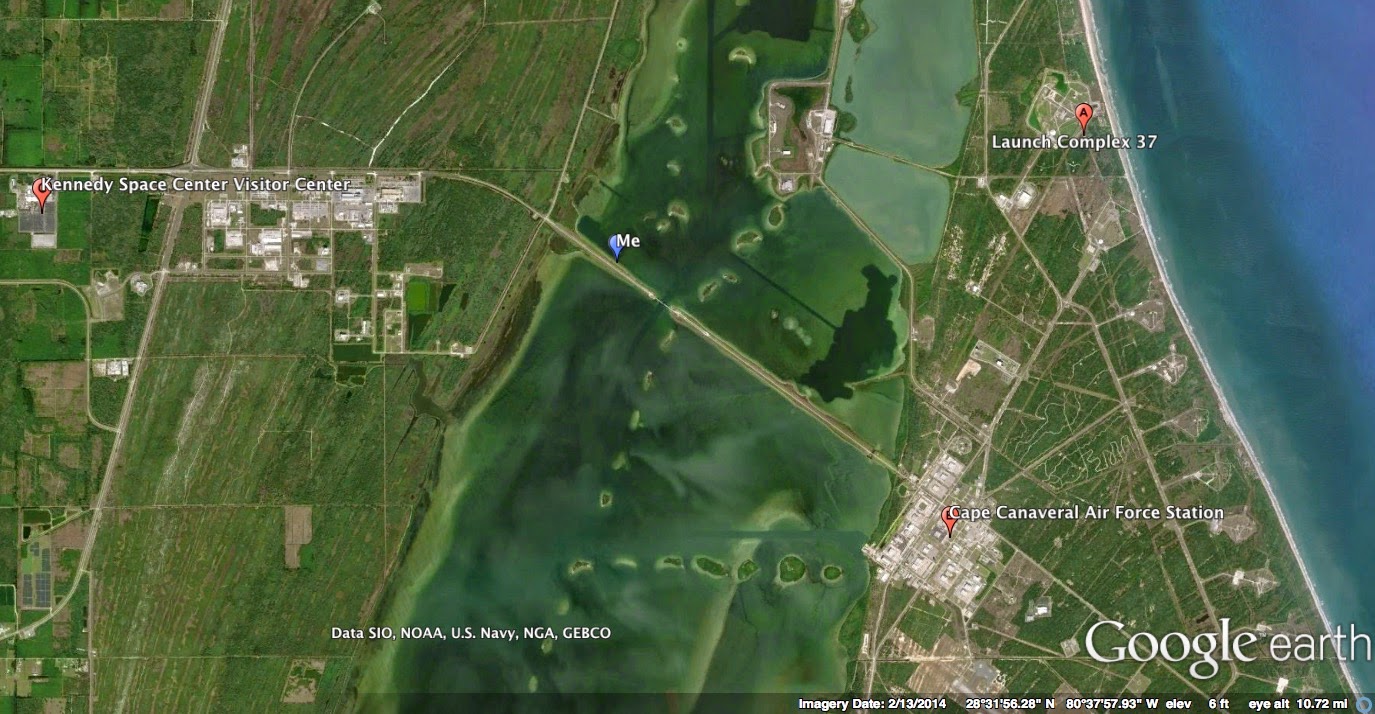 Thursday was interesting to see all the traffic on the road at 3 am. It didn't seem cold when we got there, but after a few hours of a damp wind I was chilled to the bone. As soon as the launch window opened at dawn they stopped the countdown because of a boat in the restricted area. By the time they got him out of the way the wind had picked up and automatic sensors stopped the countdown two more times. By then the valves on the liquid hydrogen tanks got cold and required extra cycles to close all the way. They called off the launch for the day so they could save battery power and try the next day.

Friday morning there were no boats in the restricted area. I wore an extra layer of jacket. The valves were functioning nominally and the rocket took off right on time. The sound seemed instantaneous with the "liftoff" announcement on the public address speaker. That may have been because the rockets light up several seconds before it moves, before it registers that it should be making noise. I was busy trying to shoot video and still pictures and grab a screen shot of my sound pressure level app all at the same time. I couldn't really take it all in. I envy the people I see in photos just watching. I can't do that. I have to share with all you good people!

After the launch we went to the Visitor Center and looked at Shuttle Atlantis. The space shuttle was a lovely space plane. As much as I enjoyed watching the parachutes opening exactly right on Orion it didn't make me feel the pride in the American space program a shuttle landing did. Those lovely lines, the big rockets! Beautiful space plane.
There's a Nature exhibit at the Visitor Center. Your basic taxidermy and silk plants and some signage that brought out my inner pedant.
This is why I can't have friends or a job.