Everglades Challenge 2014 from the comfort of my home

A few weeks after Harry called me to make up a nickname for the Everglades Challenge he sent me an email intimating that he might like me to be his shore contact. I went to the WaterTribe website and read up on the duties of the shore contact. It looked like they get automated emails from a GPS tracking device and not much else. Yes, I'd be great for that. I maintain zero inbox at all times. No email gets by me! I also noticed that the event was just a week away.

The WaterTribe website refers to SPOT and PLB a lot but never says what they are. I found this video on YouTube that explained it more than thoroughly. It's very long, but if you are curious it's interesting. I will sum up. Harry will be carrying a SPOT device, which I gather is just a brand name, that uses GPS satellites to see where he is all the time, but the way the device transmits the location back to the computer relies on orbiting satellites that may not be in range at the time. Messages could take a while. The other device is a Personal Locator Beacon that works off geosynchronous satellites that are always there, but much much higher up. But the message is immediate and I assume goes straight to the Coast Guard. This video is from Canada so it doesn't really apply, but I'm guessing the one Harry is carrying has a similar system in place. It explains the relevant technical details.

To see where Harry is at any time you can look at his SPOT tracker page. When he camps for the night he pushes the OK button and it emails me and says he's stopping. If he pushes the HELP button it means he's giving up and quit the race. I will call some people down there that might be able to help him get his boat up on dry land and get back to his car. But otherwise I don't do much. If he's really in trouble he contacts the Coast Guard directly with his VHF radio or the emergency beacon. The point of the experience is that you are on your own and nobody is there to help you. You gotta handle your shit.

The fun way to look for Harry on a map is to use the map with everybody on there. You can see where he is relative to the other participants. I'm not calling them competitors since some of them are just trying to finish, not really racing. That's Harry's plan. He's just on an expedition. 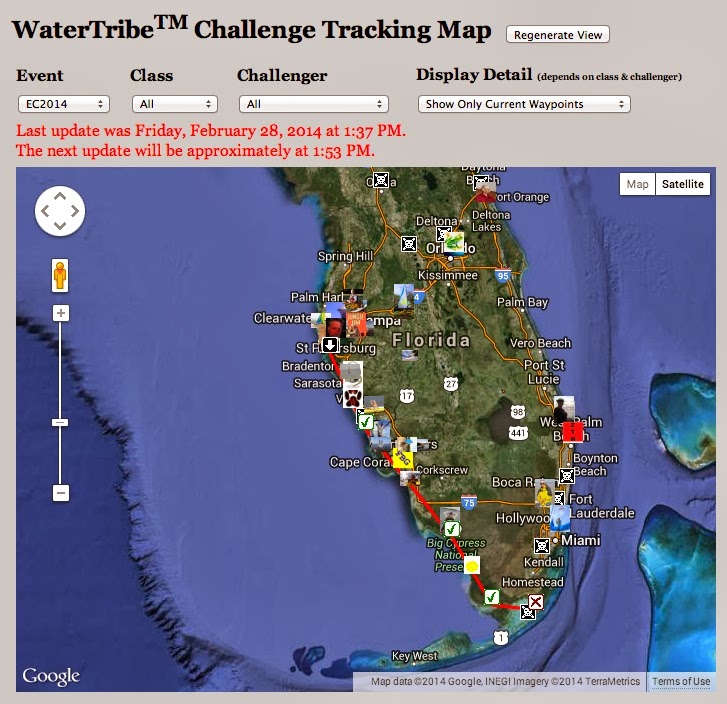 You can't see him on this map because there's somebody else's icon smack dab on top of his. The trick with this is it uses the photo from the Rogues Gallery for the icon and there's nothing I can do about it. It turns out being the shore contact means I'm also the IT person for Harry on this website, and the person with the pictures to use. This is the photo I used for Harry in the Rogues Gallery, although I cropped it to vertical. The result is it puts a big red corner in the icon on the map. Use that to pick out JibeTurkey.

Here's an example of what it looks like when you find his icon and click on it. This is from when he set up the SPOT transmitter to be sure it would email me.

All the competitors had to check in with their SPOT transmitters about a week ago. That means you can look at the map and see where everybody lives. All over the place! I assume there are so many in Florida for obvious logistical reasons. 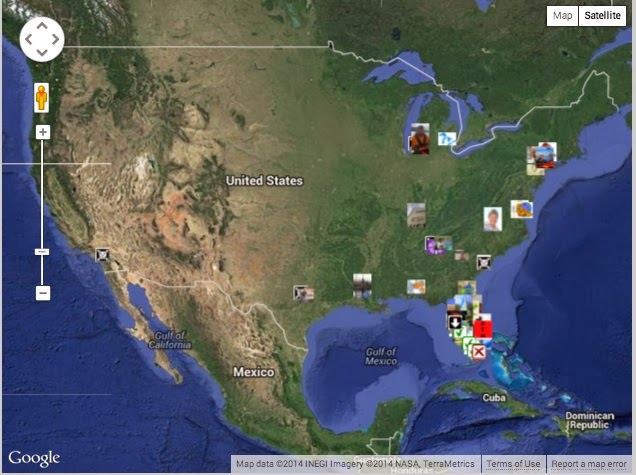 Harry called me from the car this morning on the drive over to check in. He had to work late yesterday because his client was non-plussed to find out Harry was planning to wait until after the race to gather up all their files on the finished job. They wanted them before he left so they could look over everything while he was gone. It sounded like a hectic but typical day at a civil engineering office, one I remember well and don't miss. For those of us who enjoy being paperless where every document is backed up in multiple places and on a database everybody can access it is frustrating to have to print out reams of paper for old-fashioned people. They need to handle their shit.

But that is behind him for the next 9 days. He gets to focus on just this one thing, minimizing misery and achieving a goal. I was glad to hear he has a dry suit. That's going to make it kind of nice I think. I hope he gets through the unpleasantness of Sarasota Bay and the environs polluted with power boats without giving up. It sounds like getting to the wilderness of the Everglades is the good part. He said he would send me pictures from his phone if he can, so I will continue to update my blog as I get news.

Also be sure to ask questions in the comments. If he's already told me the answer I'll pass it on or I can ask him if he calls me. I'm not expecting to hear from him every day. In fact I'm expecting damp salt air to destroy his phone within a few days. I have studied this. Corrosion runs up under the solder mask and the traces corrode into open circuits. I tested a power supply board with large traces. I should think the fine pitch stuff in a cell phone would be even more vulnerable. I suggested he keep his phone in a bag with some Closet Dry desiccant, but I doubt he had time to go buy some. But I'm a pessimist that way.  Maybe Samsung conformal coats their printed circuit boards and I just don't know about it. The Garmin GPS he is using for navigation is waterproof and floats. That's the important thing.
Posted by Beachton at 2:28 PM