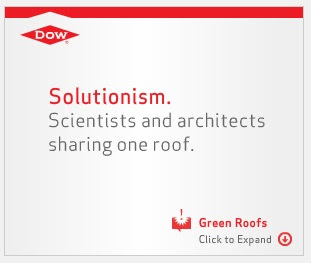 Solutionism? Why would anybody make up this word? I immediately disliked it when I saw it. Scientists and architects sharing one roof is usually called "an engineering firm." I get that they're trying to promote green roofs, but even those are the arena of engineers, maybe with a landscape architect on the team.

Is "engineering" passé? I mean "engineering," the word, as in what engineers practice. Used in a sentence, "I'm studying engineering." I dislike engineering used as a verb, "I'm engineering a solution to this problem." The proper word there is "designing."

I've noticed that in popular media and TV shows where they have engineers as characters they never say "engineering." They just use the word "science" over and over. I'm thinking of the recently finished series Eureka. All those people were engineers, not scientists, but they probably used the word science 10 times for every 1 time the word engineer snuck into the dialog. I don't watch the other popular show with actual scientists on it, "The Big Bang Theory," primarily because the way the actors have to pause for the live studio audience to laugh makes me want to throw things. I think they may make fun of engineers as inferior, but I can't verify that. If they're at least making the distinction that's a step in the right direction. I think the general public needs to understand engineering now more than ever -- crumbling infrastructure, coping with climate change.

My dictionary defines "ism" as chiefly derogatory: a distinctive practice, system, or philosophy, typically a political ideology or an artistic movement. Sticking it on the end of "solution" really rubs me the wrong way.

The Apple Dictionary has this to say about "solution":


word trends: Everyone is familiar with advertisements offering all manner of solutions: high-end storage solutions | a leading provider of payment solutions. The usage began during the 1990s in the computer industry, where solutions were packages of software and hardware put together by IT companies to do a particular job for their customers. It is now an all-purpose word in commercial language for products, services, or companies, and is sometimes almost meaningless: frozen meal solutions are just frozen meals, after all. The term's overuse perhaps implies a stressed, anxious society, where everyday needs are marketed as problems that require solving. See also issue.

Making up a new word out of an overused meaningless word is some real meta marketing. I don't think they're doing us any favors. Engineers are trying to move us forward and marketing people are just dragging us down.

Update: I googled solutionism: NY Billboard features it. It turns out this ad campaign is big on social media, pulling in content from Twitter etc. Great. Now my negative opinion will automatically be added to their website. From that link:


Dow combines the power of science and technology to passionately innovate what is essential to human progress. The Company connects chemistry and innovation with the principles of sustainability to help address many of the world's most challenging problems such as the need for clean water, renewable energy generation and conservation, and increasing agricultural productivity. Dow's diversified industry- leading portfolio of specialty chemical, advanced materials, agrosciences and plastics businesses delivers a broad range of technology-based products and solutions to customers in approximately 160 countries and in high growth sectors such as electronics, water, energy, coatings and agriculture. In 2011, Dow had annual sales of $60 billion and employed approximately 52,000 people worldwide.

How many of those 52,000 are engineers? Why not USE THE WORD! How can you have science, technology, and products and no ENGINEERING?! Say it! THEY'RE CALLED ENGINEERS!