Ron Garan says humans are "a species" to leave the earth. That's good wording. I like how careful he was there. Neil DeGrasse Tyson must have picked up on this too because this morning he tweeted:

It's nice how people are celebrating these milestones in space exploration and engineering but it just makes me extra sad that 500 people just lost their jobs with NASA. (KennedySC tweet last week, "Last day on the job for more than 500 Kennedy Space Center workers; what's next?" With a bad Florida Times link. Searching their site only got a plea asking people whose last day was Friday to write them with their story. Apparently not enough of them felt like sharing with the paper to get a follow up.)

I hope other countries pick up our slack and get some good science experiments on the space station.

Meanwhile the big news today is where will the shuttles go. (Live Streaming, noon EST) Kennedy Space Center seems to be a forerunner. If they get one I hope they reorganize the management of their tourism. I refer you to my Negative Critique from last year and my rant about the creepy Snoopy with his head shoved in a bubble. 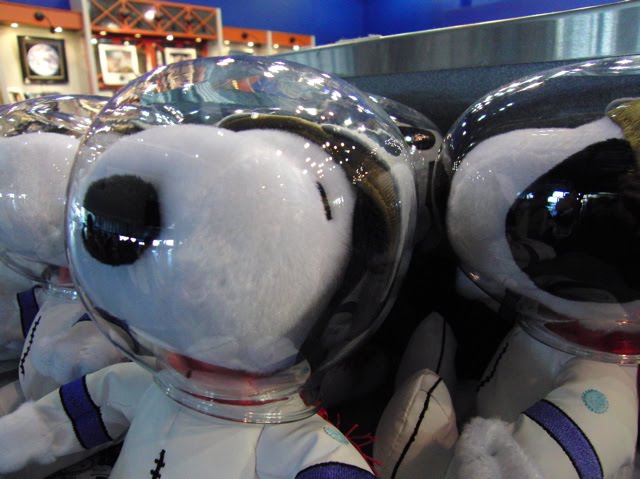 My friend who works on the space suits tells me that Snoopy is a big deal to the Apollo mission, and I acknowledge the meaning, but it still just really weirds me out.

*UPDATE: Atlantis is going to live at Kennedy Space Center. Discovery goes to Smithsonian, which we knew already. Surprise is Endeavor going to the California Science Center in Los Angeles near the Palmdale facility that built it. That's nice. The prototype, Entrepid, goes to the Intrepid Sea, Air & Space Museum in New York City. That's a good geographic spread. I'm sure Seattle is crushed and Johnson Space Center is probably pretty disappointed. Sorry you guys. This whole thing is pretty sad.

Charlie Bolden, NASA director, almost cried about 10 times reading his speech. He said we should stay focused on the next few missions. That's the engineer way. Solve the problems, make it work, and deal with the demise of our own career later. It's tough when you define yourself with a career then you make it disappear.
Posted by Beachton at 12:24 PM