People with no sleep smell like cake mix and violence 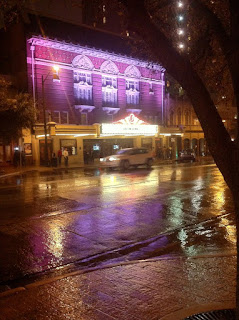 It's been raining since yesterday at 5:00 pm. I've only been in Austin half a year but this seems unusually dreary for here. Not such great weather to cheer up  comedians after Fargo and Des Moines. Despite this downer Patton Oswalt and his opener Joe Mande got up on stage and told their stories at the Paramount tonight to the obvious enjoyment of a sold out crowd.

Patton was incredible. But I have to take a moment to reprimand Joe before I get to the rest because we have been over this. Cows have four teats. Finish one, there are THREE left, NOT FIVE. I'm gonna let the rest of the ridiculousness of that bit go about the first man to drink milk. This is Texas and I guess you thought we'd be lax with the specifics of evolution and domestication of livestock.

Patton shared some stories about his book tour and radio interviews and airport escapades. But what I liked the most was what I said before -- the word usements that he structures -- he's just such a poet. He can take the same story every person on the planet who has a baby has told about no sleep but with a few carefully chosen words he can make it fresh. "People with no sleep smell like cake mix and violence." I love that. I appreciate that he had the right crowd for a line like that. I was jealous.

Smells definitely trigger instant adjectives like that sometimes. But when you say them to  people in the wrong mood it doesn't work. I opened the front door to our office one day last week right after my boss microwaved some of his weird curried leftovers. "Man, it smells like a maharaja's crotch in here," I blurted out.

My boss was standing at the secretary's desk and gave me that look like a dog trying to do math. "How would you know that?" he said. Oh never mind, Mr. Literal.

Patton did a thorough analysis of sweat pants, something he no longer mocks since fatherhood. He pointed out several immutable truths, such as the concept that nobody ever takes a shower and does a full toilette only to pull on sweat pants to go to the grocery store. "Swamp ass" was the apt term he used. He used appropriate hand gestures to describe how this funky zone can be used as a weapon, sliced off and thrown at attackers. Howling laughter.

As an anti-kids person I guess I am exempt from the sweat pants appreciation group. It was sweatpants that contributed to that poor woman getting burned so severely by the McDonald's coffee. I am suspicious of them as a garment. I am more a disciple of Dolly Parton in this area. Dolly once said she never goes anywhere unless she has her wig on and her makeup just so. She has to maintain her persona even just to run errands. I think that's admirable. I'm going with that. Patton can have his two hours sleep and sweat pants with matching t-shirt and flip-flops. What may be a heinous outfit is legitimately good material and I appreciate that.

Thanks for the show!
Posted by Beachton at 12:49 AM