So I kinda dropped my iPhone in Barton Creek today. I have had a migraine since Wednesday but I said to hell with it, I'm going outside anyway, so I headed down the big hill to the creek. When I got down there my head hurt pretty bad so I climbed out on this rock to think about going back home. I took out my phone to see if I could take a picture of the rock I was sitting on and the neat rock wall background at the same time. I took some pictures then I wanted to wipe the screen off because it had some greasy marks from my last round of Angry Birds. I had on these new arm warmers I got that cover up the back half of my hands. I  just rubbed the phone on my pants like I usually do, but the arm warmers made by grip different than usual and the phone just SHOT out of my hands and went PluNk! into the water.

I looked down and saw it down there with the last picture I took shining up at me. Maybe it was the migraine that made me so calm. I didn't even cuss. I considered getting out my other camera to take a picture of it, but I decided that it was more important to get it out of the water as soon as possible. I climbed down off the rock and took off my shoes and socks and my backpack and the stupid arm warmers and waded out there and got my phone.

I realized I was going to have to go all the way in when I got up in waist deep so I took off my hat and glasses and put them up on the rock. And I just bent over and picked up my phone. I came up and flung my hair out of my face and immediately pushed the OFF button. But off is tricky. You hold the button then you have to slide a thing but I couldn't see because of the water in my eyes and I couldn't tell what it was really doing. I climbed out of the water, took the case off and dried the phone on the arm warmers and put it on the rock while I dealt with being soaking wet on a 50° F day. There was a man and his two toddler sized girls up on the waterfall about 30 yards away but they hadn't notice me. So I kinda crouched down behind the rock and stripped off my shirt and put on the dry jacket in my backpack. Then I climbed back up on the rock to get my hat and glasses and put my socks and shoes back on. Only then did I get out my camera and take some shoddy pictures of the whole scene. I was not in my best form today and my art suffered for it. I apologize.

I went quickly back up the hill to get in my car to go home and dry out my phone and myself. It's a 300' hill in less than a third of a mile, so I didn't get cold except for my butt. These Mountain Hardwear pants I have are amazing in their ability to shed water. Apparently they do it by channelling all the wetness to the butt. My butt was absolutely freezing by the time I got up to the top of the hill. 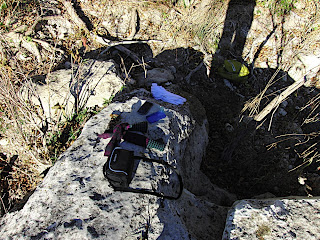 I was thinking the whole time about how I was going to dry out the phone and hoping no water got to hot circuitry before I got it turned off. When I was within sight of my car I heard a little bwooo noise. WTF? I have MAIL? It's not even OFF?! Crap! I got it out and pushed the power on/off button again and it didn't do anything. That means the display is crapped out and other parts are still working. Not good. Not good at all. I hurried home and put all my wet clothes in the washer and got on my laptop and made an appointment with the Genius Bar before I even took a hot shower. Next opening was at 5pm. Gave me an hour to get dried off and over to the mall. The mall the weekend after Thanksgiving. Gawdhepus.

I got to the Apple Store 10 minutes before my appointment. I checked in and stood like a statue amid the milling masses. Right at 5 Megan came and said she would help me. I gave her my phone with the visibly fogged camera lens and she went in back to open it up. She came back and said there was water all around the battery. She said it was a goner. What happens in that case is they sell you a whole new phone. But it's the same price I paid in June when I got a new 2 year contract. It doesn't re-up the contract or change my upgrade options later. It's just a straight up $199 and I just pretend it's my same phone with the remainder of my original warranty and AT&T contract and everything. That's not bad. I mean, I did basically throw it in the creek. I should expect to have to buy a new one. Apparently it is important that you give them the old one though. I don't know if you get that deal if you just LOSE your phone. So as far as dropping my phone in the water goes, that was actually pretty lucky.

I had my iPhone out last Sunday kayaking on Town Lake and if I'd dropped it right here there would've been no getting it back. I have a wrist strap on my camera. Maybe I need a special sport case for my phone with the same kind of countermeasures. I'm going to work on that.

So I was out of the mall by 5:20 and on my way home with my new phone. Megan said it was a 4.1 phone so I would have to upgrade it to 4.2 and then right click the icon to restore from backup. I was a little nervous about Angry Birds. Would I have to start all over?! I was up to level 6-13! I got home and plugged it into the Macbook Pro.

Looks like Megan knew what she was talking about. iTunes wouldn't let me restore my old phone setting until after I updated the firmware. I renamed the phone "Into Oblivion" and set it up as new, then did the upgrade to 4.2.

Once I had it finished setting itself up I right clicked on Into Oblivion and selected Restore from Backup and went to make a cup of tea and get a slice of apple pie.

When it finished it was Into a Deep Sleep again. I anxiously started up Angry Birds and it asked me if I wanted to log in as me or start a new game. Log in! Log in! I put in my Apple password and it restored my game the way it was when I charged my phone at 12:45 this afternoon. Whew! I only lost one level! And it wasn't that hard. I can totally do it again.
So all in all dropping my phone in the creek was a good exercise in how well Apple's back up and restore works. All my notes are in there with Helvetica defined as the font, my desktop pictures were put back the way I had them. Not only are my contacts there, even the list of recent calls is accurate. Everything is exactly the way it was at 12:45 this afternoon! It even put the pictures that were taken on the phone back in the default folder. (Which I'm not sure is the right way to do it because it takes too long to download when it has to reject duplicates. I need to delete those and sync a different folder. Anybody have tips on that?)
Now that it's glove weather everybody be careful with your phones! They're slipperier than you think!
Posted by Beachton at 8:26 PM

Email ThisBlogThis!Share to TwitterShare to FacebookShare to Pinterest
Labels: iPhone in the creek, liquid damage, restore from backup