My Blood Pressure Goes to 11

I'm having one of those days where things that have NOTHING to do with me fill me with UNSPEAKABLE RAGE! And then I get on here and type it so it becomes unreadable rage. I have figured out that I have some kind of abnormal emotional reaction to shit that has nothing to do with me. It's why I cry when I watch TV shows and absolutely can't watch horror films. So here's what happened and what I found out about it scientifically.

While I was waiting for a doctor's appointment this morning I was scrolling though my Twitter feed and read this:

I opened the picture and she's not kidding. Two signs reading "Men's Interest" bracket "Science and Technology" and "Business." What the FUCK? What if I'm interested in those things? Am I a man now? What the hell is in the Women's Interest section? No wait, I already know. I'm waiting in a fucking gynecologist's office. There's nothing in there but magazines with beaming pregnant women and toddlers on the cover and headlines like "How to Teach Good Manners: No More Biting, Kicking, or Hair Pulling." I would give my left ovary to have them throw in a MacWorld, Discover, Astronomy, Popular Photography, or Car and Driver, all magazines I can see in Sheril's picture.

Then they called me into the exam room and took my blood pressure. 110/90 the nurse said. What? I was just there the week before and it was 110/60. Why'd it go up so much? Just because I got all mad about that sex-role-stereotype-promoting bookstore? That's so weird.

After my doctor's appointment I shot off an email to my mom giving her an update on the doctor thing and I told her about the bookstore. When I got home from work I had an email back from her saying maybe it was overreacting to the insult (I'm sure I am. I'm not normal) so I went to look for the picture on Twitter so I could send it to her. That's when I saw this.

@astroengine Dr. Ian O'Neill
WTF @CNN? Asking the "As a member of the public, why should I care?" question during the #NASA #EPOXI mission conference is horribly trite.

"As a member of the public, why should I care?" FUCK YOU, CNN! You can kiss my public ass, you incredible bastard. Who the FUCK would say that? Didn't your mama ever read the magazines in the goddam gynecologist's office? I shot off a reply to @astroengine to see if he could count how many people flipped off that reporter. If I had been there I would have hollered, "BITE ME!" without being able to stop myself. (Dr. Ian O'Neill is the person that made my rocket video go viral. We've never corresponded though. I just read his articles at Discovery and his blog. I don't know Sheril Kirshenbaum either. She believes we're in for a war against science and I think it's already started.)

Now I didn't really give a damn about Juan Williams. I don't care about Fox News or what they pay people to say on there. I let people go on about it and kept my mouth shut. But THIS, pisses me OFF! I don't want to see this CNN person fired or anything. They clearly don't have a grain of respect for anybody who is interested in something they aren't interested in, so they couldn't possibly be worried they they would insult us. I don't expect they asked the question to be malicious, they probably weren't raised with any exposure to scientists. They are just a smart-blind nincompoop who doesn't realize their own incompetence. I accept that 99% of the people in the world are not like me and I try to not be a dick. But I've had just about e-fucking-nough of this bullshit. If I can sit in an office full of baby-centric propaganda and be polite about it then you, CNN reporter, can sit quietly in a press conference your boss accidentally sent you to thinking you had a grain of competence and professionalism and wouldn't make an ass out of an entire news organization. I bet your boss won't make that mistake again.

So anyway, I read Ian's tweet and I got incensed and I started to write this blog then I realized I had an opportunity to do some science. So I jumped in the car and went to the grocery store to use the blood pressure machine. 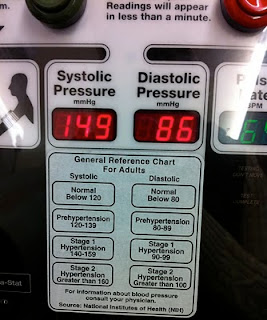 Well will you look at that shit? 149/86?!! I did it again and it was 143/91, so it's not all that repeatable, but I'd wager it's 149 plus or minus 10 over 86 plus or minus 10. Which still doesn't get me anywhere near my normal blood pressure of 110/60. I asked the pharmacist if they ever had it calibrated and he said no. But it's probably not off by THAT much. My blood pressure shot up something like 40% just because some CNN ass clown insulted my entire profession? That's AMAZING! I really didn't know there was such a strong physical correlation to emotional reactions. Want to bet that reporter doesn't care about this little discovery either?

As for the reporter's actual question, there is just a fundamental problem in the asking. If the rest of the public doesn't care, they can just ignore the thrill of a spacecraft being repurposed to fly by Hartley II. We -- scientists -- understand that not everybody is equally interested in things. I work with hard-core computer engineers and I don't think even they would be that excited about this asteroid data even though I'm really thrilled by it. I didn't mention it to them. When I stop working Friday afternoon to watch the shuttle launch I don't expect them to watch it with me. But I do think they'll understand enough to let me take a break to follow it. But for somebody to come to a NASA press conference and blatantly demean our excitement by saying this giant step of exploration doesn't interest you?! And you want us to justify ourselves by lowering our accomplishment to terms so simple your rudimentary brain can grok it? What were you thinking they were going to say? "Well just look at it! It's so SHINY! And it's shaped like a peanut!" Somebody colorize it green and we'll say it makes you horny. Dub some 8-bit music on that video and make a line art triangle shoot dots at it and disappear off the top of the screen and reappear at the bottom. But you have to give us a minute to make it mainstream. We're still having fun with the actual science.

There are things people care about that other people just don't get. I don't ask people why they care about procreating. I just don't get it, am never going to get it. I don't want a baby. I am uncomfortable with the whole concept. So I won't go to baby showers and that CNN reporter can call that NASA mission conference their last.