Gravity Movie Review and How to Make Custom 3D Glasses

Gravity was a terribly written movie. As a writer this makes me think it's a terrible movie. My aunt who is a writer warned me that it was terrible but thought I should see it anyway. Lots of people (mostly men) seem to like it because the acting is good and the visual effects are good so they excuse the asinine and offensive writing. My aunt and I are not inclined to go easy on the writer. 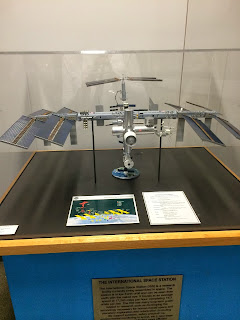 I liked the sound editing. I watched Gravity at the Challenger Learning Center in Tallahassee where they have a model of the space station and a real ISS sleeping bag on display. They started the show with a preview for the IMAX documentary Hubble 3D, which was kind of a mean jab to plug a documentary about something that was about to be made into a ridiculous story in the feature presentation. But my point is that the sound system in a science center IMAX theater is well designed and maintained. So there was lots of rumbling bass and stereo effects I can't get at home. I felt like I didn't waste my $10 on the ticket. The effects guys did a good job with mechanical sounds transferring through solid objects even though everything was meant to be in a vacuum.

If I was an astronaut that's where I would stop. Because astronauts are polite. I haven't seen a single astronaut on Twitter say nasty things about this movie, even Mike Massimino who it seems the George Clooney character is meant to resemble. I admire them even more than I did already for that. But I have acid reflux so bad I could never tolerate weightlessness. I can never be an astronaut. So it's not like I'm going to ruin my chances of getting that job if I say what I think. 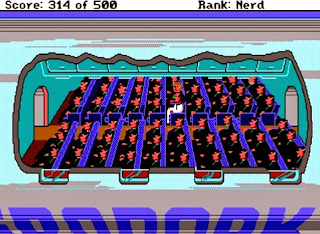 In fact I kind of say what I think right during the movies. It's a bad side effect of being alone all the time and only going to the theater about once a year. I promised my friend that I would try to be quiet. I had a plan to count the things that made me want to yell at the screen like Matt Oswalt at Jerry McGuire on Christmas Eve instead of really doing it. My friend thought I would run out of fingers pretty quick. He was spot on. I scooted far to the other side away from him and mouthed expletives into the dark and made hand gestures. I rely heavily on the one I learned from the man on the airplane next to Leisure Suit Larry in game two.

My running commentary from Gravity:

What the hell is he DOING?!

What is that music?

Release to listen? This music makes NO SENSE! How can anybody else talk? Magic mic mixers.

Doc? WTF Doc? They ALL have PhDs. Why is she Doc?

STOP IT! Goddam flying around. NOBODY DOES THAT!

Basement of a hospital? What the fuck? Nobody designs electronics for a space telescope in a hospital. Doc is medical doctor? The fuck?

Communications satellites are flying UP at you?! NO! They are WAY HIGHER!

(close your fucking visor became a hand gesture of turning imaginary knobs by my ears. I alternated between the one rapid hand motion at my lap and the knobs by my ears to close the visor. The sunrise Clooney loved so much will fucking burn your face off and blind you if you don't have that gold visor down.)

That's not how they say Soyuz.

WHAT?! Get the body?! NO! That's not what an astronaut would do!

Where are you FROM?! The fuck? He didn't read her bio in 6 months she's been slated for this mission?!

NOPE NOPE NO NO NO (suit off in 3 seconds to gratuitous underwear conveniently tight so no microgravity-clothes-floating required.)

Oops, back to regular earth flame. Close the air locks. No, not that, OW

Oh, nice Soyuz hatch. That looks real. Good thing they weren't storing a lot of shit in there that day.

What about the 'chute?

You got in that suit HOW FAST? And what was it even doing on board?

Handy that tool just happened to be on board and charged up.

There sure is a lot of stored air for repressurizing that Soyuz.

Radio just HAPPENS to be on Houston frequency? Why not call Moscow?

Oh, now you're on AM ham band?

RELEASE TO LISTEN! WHAT?

Why is that ham just broadcasting bullshit? NOBODY DOES THAT! RELEASE TO LISTEN!

NOBODY WILL PRAY FOR YOU?! You're a goddam ASTRONAUT! STRANGERS will bring you up in church for a year!

They can't hear you! They're TRANSMITTING!

You sucked as a parent.

Embrace your atheism. This is bullshit.

Fuck your dead baby, fuck it right in the red shoe.

Way to master the controls.

Another good air lock flying open. There's no pressure release on these from the outside?

Why is some of this debris catching up with her? It doesn't look aerodynamically superior.

Fast reaction getting that hatch open before the canopy even collapsed. Guess she wasn't buckled in.

Keep your helmet on.

Glad that's shallow. Should have kept your helmet on.

Of course she can get a space suit off in the 30 seconds she can hold her breath so we can see her underwear again, but now it's wet.

That's pretty orange sand. No idea where that is.

Now I feel kind of bad for all this negativity so I'm going to share something useful. Before I went to the movie I made myself some custom 3D glasses. Superior to the one-size-would-never-fit-my-child-sized-head ones they hand out. Here's how to make them.
Posted by Beachton at 7:43 PM