Cool, man, the dude is in the grid! Tron Legacy Review 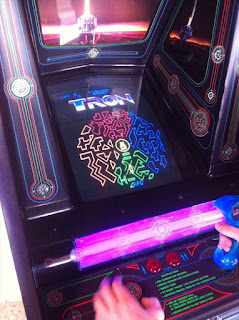 I just got back from seeing Tron Legacy at the Alamo Drafthouse here in Austin. I talked a friend into letting me go to his office Christmas party. He works for Red Fly Studio, the kind of place that gives everybody a Friday off and rents out a theater for them all to see Tron together at 9 am. I think a lot of those weary game designers just decided to sleep in. But Daniel and I took full advantage of the menu on the company tab and had mimosas and french toast and the whole bit. I was really excited to be anywhere but at work. I had a blast.

So what's the deal with Tron? I prepared for my outing by watching the original. It was a little bit weird with the reverse-religious overtones to renounce the creator. And the idea that a programmer can make a program that is good enough to boss him around yet he isn't smart enough to quit the damn thing exceeds my ability to suspend disbelief. Other than that it was ok. I did note at the end that the soundtrack was recorded by the London Philharmonic. Real instruments. Make a note.

Tron Legacy then is set in some kind of present-day timeframe but in an alternate reality where Ducati and Coors are a logical product placement combination. That made me laugh out loud. Once the scene shifted to The Grid I started getting more and more amused. Apparently it was just me though. People jaded by video games had no reaction to the blatant sex-role stereotyping of this imaginary microworld. The notion of gender was summed up in stacked wedge heels and eyeliner. Of course there were only 5 female type characters in the whole film, but every one of them was wearing heels and fake eyelashes dammit!

Most other reviews make reference to the bad screenplay and the good effects and soundtrack*. The screenplay didn't bother me. There was precious little dialog and it was all expected quips a la James Bond or any other action movie. But so what? I was already so distracted by the visual and sound effects I was immune to it. The inked-in effects from the light cycle races of the original were upgraded visually to liquid metal a la Terminator and sonically with flanger pod racing effects a la Star Wars. Then for good measure they threw in a lot of 20-50 Hz signal generator for low bass whenever something big moved. This sounded awesome at the Alamo with plenty of subwoofer power. But it just cracked me up because they kept talking about stuff on computer scales, like cycles on the order of microseconds. There is nothing in that frequency realm that has any business in low bass range. Again my suspension of disbelief was challenged. Not in a bad way, it was just funny. It got me in the mood for Jeff Bridges to deliver one of his lines a la Lebowski.

This one didn't have any of the awkward intelligent-design nonsense of the original, it had another corny moral at the end. It was somehow proper that the whole thing be summed up in a platitude I flatly don't believe in it since I couldn't take any of it seriously the whole time. But since 99.999% of people do believe that children are then end-all be-all of existence I hope it doesn't offend them that this silly movie ended that way. It didn't bother me a bit. So much fun.

Now I have to go to work, dammit.
* Soundtrack note: The Daft Punk soundtrack is on sale on iTunes and there's even one song you can download for free. I must admit the whole time I was thinking, "How are these guys cooler than Tangerine Dream?" They sound the same to me.